Opposition leader Adrian Delia has issued a sworn declaration denying he was ever approached by Yorgen Fenech, or anyone else, with a financial offer to undermine the campaign of any PN election candidate.

The declaration was made in court in reaction to allegations the man suspected of masterminding Daphne Caruana Galizia's murder also attempted to bribe the PN into preventing the re-election of MEP David Casa.

On Wednesday, the self-confessed murder middleman Melvin Theuma, claimed Fenech was irked by Casa's interest in his secret offshore company 17 Black, and had offered the PN money to ensure he was not re-elected.

The allegations involving the Nationalist Party first surfaced last year when David Thake, now a Nationalist MP, had suggested while interviewing Delia that Fenech had offered the PN €50,000 if Casa was not re-elected.

The claim had been promptly denied both by the PN and by Yorgen Fenech himself.

The PN issued another denial on Wednesday but Thake called for an internal investigation by the Nationalist Party to find out who tried to “broker a deal” with Fenech. He also urged the police to investigate “corrupt electoral practices”. On Thursday he said he had been summoned to police headquarters on Friday. 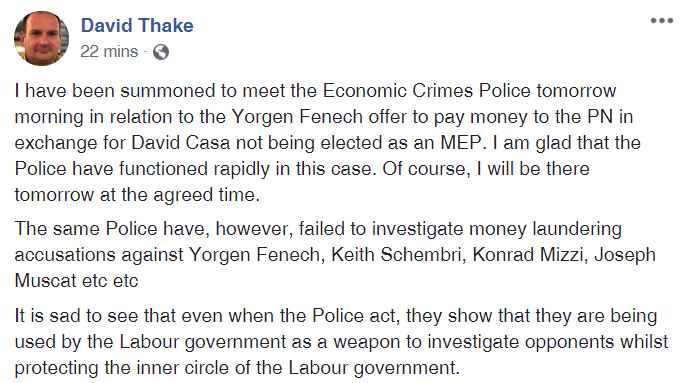 In its new statement on Thursday the PN made no reference to Thake's requests but instead referred to reports "in the Labour media".

The PN said it wanted to make clear once more that the party never received any offer or payment to undermine the campaign of any of its candidates in the European Parliament election or any other election.

The party also enclosed the sworn statement by Delia denying having been offered or receiving any offer from Fenech.

The PN said Delia was challenging the Labour media to, within 24 hours, produce evidence to back its 'lie' by handing any evidence to the police.