Cyclists have slammed the roads agency for using cycling infrastructure to justify the take-up of land to expand the Mrieħel bypass with a flyover.

NGO Rota said that while Infrastructure Malta had claimed that additional land was required for a new cycle lane and footpath, the proposals presented to cyclists in October did not mention any additional land take-up.

According to these initial plans, the cycle lane would have been on the side of the industrial estate and residential area.

It was only on November 16 that Rota was informed that the cycle lane will be removed from the inner side, and, against the NGO's advice, redesigned on the periphery next to the fields.

"Rota had informed IM that this proposal was unacceptable as it would become
useless and unsafe for people travelling by bicycle," Rota said in a statement on Friday, adding that during discussions with the agency, the NGO had flagged several existing rural roads in Qormi valley such as Triq il-Belt Valletta, Triq il-Ħofor, and Triq Hannibal that would not take up additional agricultural land.

"Following this, it has unfortunately become clear that IM is only using cycling infrastructure as a pretext to take up more land for road widening without
considering the needs of the users for this infrastructure.

"There is enough space to create safe cycling infrastructure without taking up additional land," it said. 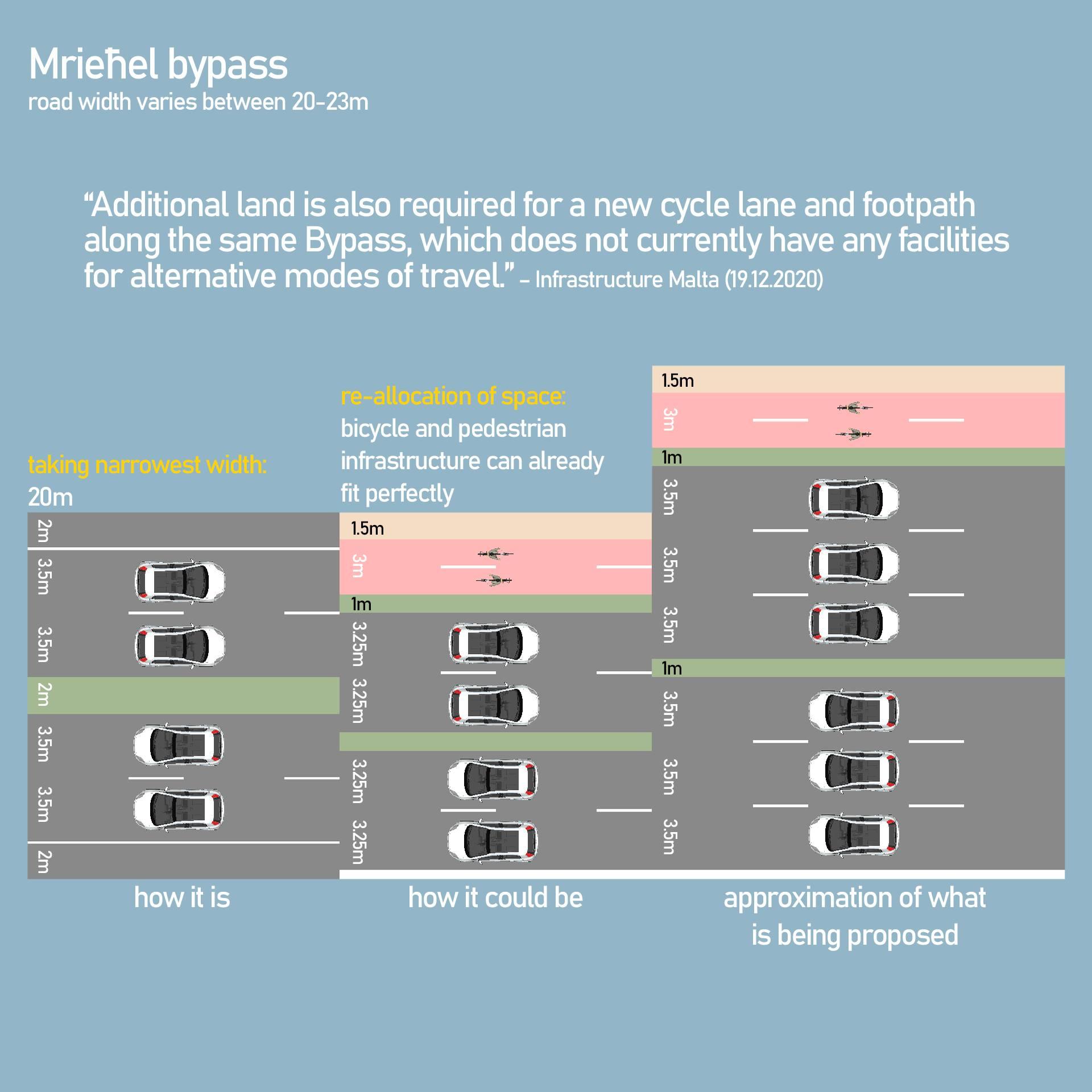 The plans for the busy road were revealed last month by Moviment Graffitti, which said that the flyover will replace the current pedestrian bridge and take up agricultural land equivalent to the size of three football pitches.

Farmers have called for consultation with all stakeholders to find alternative solutions to sacrificing agricultural land.

Infrastructure Malta has defended its plans, arguing that the flyover is needed to remove the danger caused when traffic from the south of Malta crosses the bypass to enter the Tal-Blat area adjoining Mrieħel industrial zone.

However, the project has received heavy criticism.

Among others, the Qormi Local Council has urged IM to just close the dangerous junction across the Mrieħel bypass and re-route traffic to other roads.

President Emeritus Marie Louise Coleiro Preca has also raised concern, insisting that IM should address questions on how the project will impact the area and the town of Qormi in particular.

Former prime minister Alfred Sant also slammed the agency's plans to build a flyover at the Mrieħel bypass and said IM must become far more transparent and accountable for its projects.

Cycling, walking track moved to other side of road to save trees, says IM

But in a reply, Infrastructure Malta said some organisations are “perpetuating the lie” that its proposed safety upgrade of the Mrieħel Bypass involves the widening of this road to six lanes.

At no point during the ongoing planning stages of this project did Infrastructure Malta consider the widening of the Mrieħel Bypass to six lanes, it t said.

It confirmed that while, initially, its road planners had considered including a new segregated path for pedestrians and cyclists along the eastbound carriageway (Mrieħel to Qormi), this proposal was discarded upon further studies since it would have necessitated the shifting of parts of the road’s existing central strip and the uprooting of many of its mature trees.

In addition, this proposal would still not have led to a reduction in the area of new land required for this new infrastructure. So while the land-take would have remained the same, more trees would have had to be removed. This, it said, was the main reason why it is proposing the new cycling and walking track along the other side of the road.

Rota’s proposal to narrow the road’s existing vehicle lanes to approximately 2.75 metres was not adequate for the road in question, IM said. The 3.25-metre lane it quoted, IM said, was incorrect as it omits an additional space of up to 0.5 metre on each side of the two carriageways, required in such road design between the lane edge line and the kerb.

Infrastructure Malta also referred to what it termed as “recent false allegations” by individuals and organisations that the proposed safety upgrade of the bypass requires 22,500 square metres of additional land.

The proposed new flyover and the roundabout beneath it, to eliminate the accident blackspot at the T-junction with Triq in-Negozju, will only require 5,657 square metres, 75% less than falsely alleged, it said.

IM said that the planned safety upgrade, which is still in its initial design stages, involves the construction of a flyover at the junction between the Mrieħel Bypass (Royal Malta Artillery Avenue) and Triq in-Negozju.

It will eliminate the existing accident black spot, where vehicles are forced to make a sharp turn against oncoming traffic to reach Mriehel through In-Negozju Street, a black spot since the bypass was built in the 1990s.

This safety upgrade, IM said, is specified in the National Transport Master Plan Malta 2025, which ranks it as the eighth most important arterial road upgrade required to ensure the safety and efficiency of the TEN-T (Trans-European Transport Network - Core and Comprehensive) in Malta, as required by Regulation (EU) 1315/2013.

This road’s junction safety is also highlighted as a principal point of concern in the 2006 Central Malta Local Plan. The plan identifies safety upgrades to the Mrieħel Bypass as one of the area’s policy priorities.

It said that the second objective of the proposed project is the introduction of new facilities for alternative modes of travel. The proposed segregated cycling and walking track will be separated from the existing vehicle lanes by hundreds of new trees which Infrastructure Malta proposed to plant along a new one-kilometre landscaping strip.

If the planning and environmental authorities approved the proposal for this new segregated lane for more sustainable modes of travel, about another 8,800 square metres of land are required, still a far cry from the 22,500 square metres alleged by some organisations.

Infrastructure Malta reiterated that this is “the safest, and most sustainable proposal” for the introduction of new facilities for pedestrians and cyclists along this road.

“It will now be up to the authorities to determine whether or not to approve the construction of this new cycling and walking infrastructure,” it said.

Longest cycling lane of its kind in Malta

IM said the new 1.6-kilometre segregated lane for cyclists and pedestrians along the Mrieħel Bypass will be directly linked to the 4.3-kilometre segregated cycling and walking track of the Central Link Project, currently extending from Ta’ Qali to Mrieħel, so that it can be used to safely reach Qormi as well. This will make the Central Link Project’s cycling and walking track, the longest of its kind in Malta, even longer, reaching almost six kilometres.

The proposed new segregated path for cyclists and pedestrians will be safely connected to Mrieħel, Balzan and Birkirkara through three crossings, including two toucan crossings (near the Malta Financial Services Authority offices and at the proposed Triq in-Negozju flyover junction), as well as a pedestrian and cycling underpass half-way along the same bypass. The proposed upgrade will increase safety and accessibility for cyclists and pedestrians travelling to and from Qormi.

Public to be consulted

IM said that once the plans for this safety upgrade are discussed with all stakeholders, including the applicable environmental and planning authorities, the final proposal will also be made available to the public for consultation before it is put forward for the Planning Authority’s decision.

IM said it is committed to continue seeking discussions and consultations with all stakeholders to ensure that its proposal for increased safety along the Mrieħel Bypass is optimised with realistic, sustainable and safe solutions in the best interest of all road users.