Nexia BT's Brian Tonna and Karl Cini declined to answer all questions put to them when they testified before the Daphne Caruana Galizia public inquiry on Wednesday.

Tonna and Cini both availed of their right to remain silent as they faced a barrage of questions from judges leading the inquiry and lawyers representing the Caruana Galizia family.

Their lawyer Stephen Tonna Lowell said that both men are subjects of attachment orders, an inquiry into 17 Black and under police bail for another investigation.

As judges and lawyers fired questions at them in quick succession, the two men, who both serve as directors of Nexia BT, repeatedly told the court "I choose not to answer." 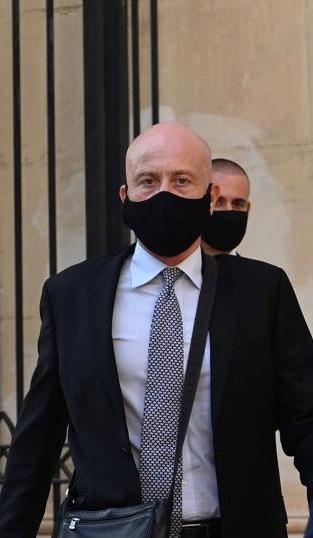 Caruana Galizia, who was assassinated in October 2017, was the first to reveal that Mizzi and Schembri had set up offshore companies while in office, using Nexia BT to do so.

Tonna and Cini were among four men arrested in September and had their assets frozen in connection with that probe, into claims that they had passed kickbacks on passport sales to Schembri. They deny all wrongdoing and have yet to be charged with any crime.

A magistrate who investigated claims which Caruana Galizia had made about secret company Egrant had also ordered that Cini be investigated for perjury.

The inquiry continues on Friday, November 6, when parliamentary secretary Alex Muscat and commissioner for inland revenue Marvin Gaerty are expected to testify.

Inquiry to continue on Friday

3.48pm  The day’s two witnesses have testified, though they have not said much at all.

That wraps up today’s events.

The inquiry will continue on Friday morning, when parliamentary secretary Alex Muscat and inland revenue commissioner Marvin Gaerty are expected to testify.

Many questions, one answer

Does his relationship with Keith Schembri extend beyond the professional?
Who introduced the two?
Did he know Konrad Mizzi before 2013? Was he a client? Did he refer clients to Cini?
Did Schembri and Mizzi hire him together, or separately?
Was he a consultant to Joseph Muscat before 2013?
What was Nexia BT’s role in the Electrogas project?
Nexia BT was the auditor of [Electrogas shareholder] GEM Holdings. Did he know the three directors of GEM? Were they his clients?
Does he deny that the UBO of Egrant was to be Michelle Muscat?

“I choose not to answer”.

That’s all from Cini, who is told he can leave the witness stand.

3.29pm There is an endless list of questions for Cini, just as there was for Tonna.

Questions are asked about his relationship with Schembri, Mizzi and Muscat; his involvement in the Electrogas power station project, from its inception; companies he is alleged to be involved with; allegations of kickbacks on passport sales; emails he sent which were exposed by the Panama Papers data leak; and issues flagged in other FIAU reports.

Judge Mallia reads from a report and asks the witness whether he agrees.

"I choose not to answer."

The judge reads from an email, in which Cini said details about Egrant's owner would be given over Skype. Who told him to do so?

Did Cini seek to open Panama bank accounts for these companies?
When did Cheng become his client?
Why had he gone to Shanghai? Was it on Konrad Mizzi's instructions?
Why hadn't he told Mossack Fonseca that Schembri and Mizzi were Politically Exposed Persons?
Why were local banks kept in the dark?

Cini remains steadfast and does not reply.

3.22pm  Cini’s testimony is likely to be a repeat of Tonna’s.

“Are you under investigation or police bail?”

Cini: “I choose not to answer”.

3.20pm Brian Tonna walks out, and Karl Cini walks in.

He steps to the witness stand and takes the oath.

A silent witness is allowed to leave

3.17pm Lawyers Jason Azzopardi and Therese Comodini Cachia have a go at questioning the witness.

“Did you have a desk at Castille?” he asks Tonna.
“When did you first meet Keith Schembri and Chen Cheng?”
“Are you still a member of the accountancy board?”
“Are you a fraudster?”
“Did you launder clients’ money?”
“Who was the UBO [Ultimate Beneficial Owner] of Egrant?”
“When did police last speak to you?”
“How were you involved in the Request for Proposal process for the power station project?”
“When did you get to know [Electrogas shareholders] Gasan, Apap Bologna and other directors?”
“Did you know Joseph Muscat before that? Were you his auditor?”
“When did Keith Schembri and Konrad Mizzi engage you to open their offshore structures? How long had they been your clients?”

Tonna declines to answer all of them.

The judges say he can leave the witness stand.

Questions flow, but answers dry up

3.13pm The judges want to know about the mysterious “loan repayment” which Tonna says explains €100,000 in transfers he made to Schembri.

Did Tonna need the money for his marriage separation? Was the loan agreement signed in 2012 or after the IIP scheme?

They also want to know about a power of attorney which Adrian Hillman, the former managing director of Allied Newspapers, granted him. Was it renewed when it expired in 2016?

Who did Karl Cini meet when he went to Panama to speak with Mossack Fonseca? What services were offered to Konrad Mizzi?

The questions go on and on. Tonna’s answer remains the same.

"Can you confirm that there was an agreement with Keith Schembri for funds to be channeled to his account at Pilatus?"

"I choose not to answer".

'I choose not to answer'

3pm Tonna gives the board his personal details.

Judge Mallia asks him whether he is under investigation or police bail.

The board of inquiry is tasked with investigating actions which may have given rise to sense of impunity. Does the witness have anything to say about this?

Does he have anything to say about his relationships with Keith Schmebri, Konrad Mizzi or Joseph Muscat?

How about his involvement in the Electrogas project?

The judge reads out a long list of company names which Tonna is alleged to have ties to.

But Tonna's answer remains the same: "I choose not to answer".

2.55pm Tonna’s lawyer, Tonna Lowell, tells the board that his client would like to avail himself of the right to remain silent and not answer any question asked of him.

He says that his client is subject to an attachment order, is a witness in an inquiry into secret company 17 Black and is out on police bail in relation to another inquiry.

Judge Michael Mallia tells the lawyer that they would like to ask Tonna questions, and then he can choose whether or not to answer them.

Tonna Lowell consults with his client.

2.51pm One of the judges recognises a face in the back of the courtroom, despite the mask he is wearing.

It’s Karl Cini, who is also due to testify today and who must therefore be outside the courtroom, waiting to be summoned.

The judge tells Cini he will have to wait outside.

2.45pm The judges now consider the third application, which Fenech’s lawyers filed yesterday. [We do not know its contents].

There seems to be some perplexity about it: the state advocate’s lawyer says he is not informed about it while lawyers for the Caruana Galizia family say the application makes “no request”.

The board of inquiry says claims made in the application are not true but defer a decision to Friday.

2.38pm Judges deliver a decree concerning the second application: Yorgen Fenech is a private person with no legal standing in these proceedings, unlike the Caruana Galizia family and the Maltese government.

The inquiry is tasked with determining any acts – or failures to act – which could have led to Caruana Galizia’s murder. All evidence gathered in public and private is intended to lead to this search for the truth.

The board will not interfere with matters before the criminal courts and is authorised to regulate its own proceedings. It can also hear witnesses behind closed doors and any testimony given in private can never be divulged in public.

Fenech’s request is therefore frivolous and vexatious, the board says.

2.27pm  The judges go over applications filed by Yorgen Fench.

There are three such applications, with Fenech’s legal team having filed the most recent one on Tuesday.

In previous applications, Fenech had applied to have testimony about him struck from the inquiry’s record and requested testimonies to be held behind closed doors.

The lawyer representing the state advocate during today’s session tells the court that he will not formally reply to Fenech’s second application, and will leave it up to the inquiry panel to decide.

2.20pm After a slight delay, judges enter the hall and greet everyone present.

Lawyers in the room

2.08pm The two lawyers representing the Caruana Galizia family in the inquiry, Therese Comodini Cachi and Jason Azzopardi, are both in the courtroom.

So too is Daphne Caruana Galizia's husband, Peter, and one of her sisters.

The day's two witnesses, Brian Tonna and Karl Cini, are outside, waiting to be summoned to testify.

Who did the inquiry last hear from?

Times of Malta had revealed earlier this year that Valletta had gone on football holidays with Yorgen Fenech, who stands accused of complicity in Caruana Galizia's murder.

On Monday, he told judges leading the inquiry that he "couldn't say no" to Fenech's holiday trips, as to do so could have raised Fenech's suspicions.

He however denied leaking any information about the Caruana Galizia case to Fenech.

1.55pm Hello and welcome to this live blog. We're outside hall 20 at the Valletta law courts, where the Caruana Galizia inquiry is due to resume.