The new daily record comes amid warnings of increased pressure on hospitals and a message from Superintendent of Public Health Charmaine Gauci that people are not following guidelines.

There has been a persistently high numbers of new cases, with 100 having been reported on Saturday and 95 on Sunday. 68 new cases were reported on Monday and 93 on Tuesday.

Prior to Wednesday, the highest number of daily cases was on September 16 when 106 new cases were posted.

The government has come under pressure to introduce tougher measures to curb the spread. 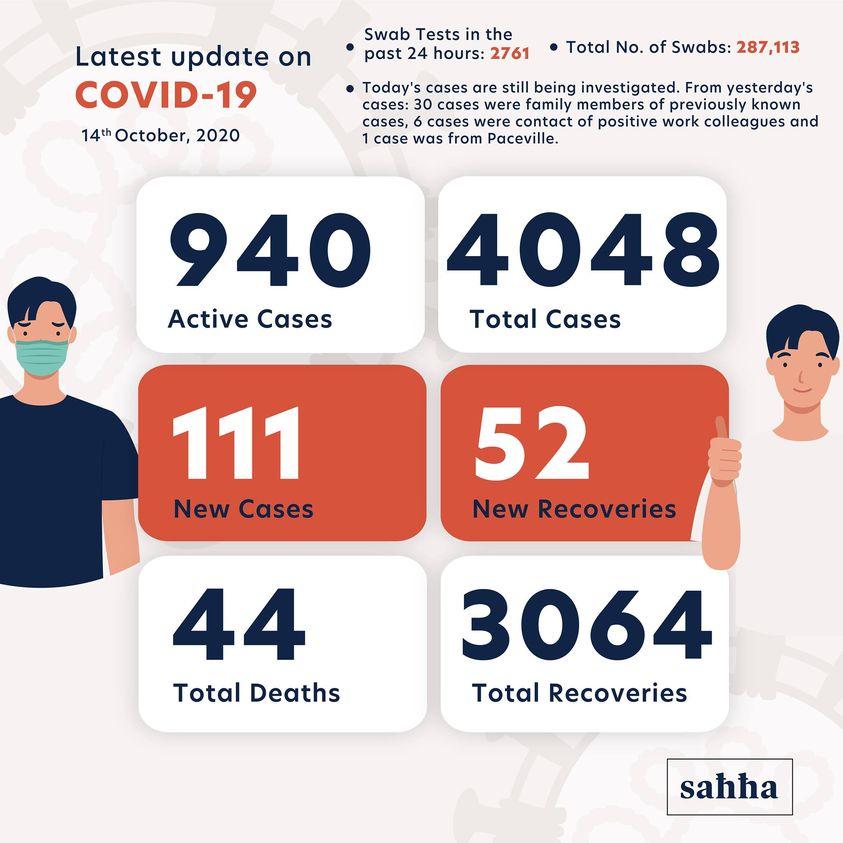 The Superintendent of Public Health, Charmaine Gauci, confirmed to Times of Malta on Wednesday that six people in ITU are under 70 years of age.

Reacting to the new record she said: "It's very unfortunate to see these numbers."

"This shows there is higher spread in the community and we worry that many of those people are people who may need admission to hospital, and who may not survive as well."

She emphasised the importance of people adhering to social distancing recommendations.

"We do have measures in place but they are not being adhered to..." she complained.

The Malta Association of Public Health Medicine earlier on Wednesday warned about increasing pressure on hospitals.

“We now have the highest number of COVID-19 patients in ITU since the start of the pandemic, several of them under the age of 60. Many dozens of people are hospitalised, with several who are young and who were completely healthy before getting infected with the COVID-19 virus. 44 people have already died from this virus. Mater Dei Hospital is opening its third ITU as part of the contingency plan. Operations are being cancelled due to lack of capacity,” the association said.

While the new cases are still being investigated, the authorities said that of Tuesday's cases,  30 were family members of previously known cases, six were contacts with work colleagues who tested negative and ne was linked to activities in Paceville.

The MAM doctors’ union and the teachers’ unions were among the constituted bodies which demanded tougher government action earlier this week.

On Sunday Prime Minister Robert Abela said there are no plans to close the airport, but on Monday he promised tougher enforcement of existing measures when he met a delegation from the Malta Hotels And Restaurants Association.

Health Minister Chris Fearne said nothing is off the table with regard to further measures which may be taken to safeguard public health.

The government has, however, resisted a PN call to declare a public health emergency, with the prime minister saying he does not want a national panic. Declaration of such an emergency would grant more powers to the superintendent of public health.

New lockdowns from China to Europe as virus trials stumble

The virus is still spreading rapidly worldwide, with over one million deaths and 37 million infections. Many nations that suppressed their first outbreaks now face a second wave.

Hopes for a rapid vaccine rollout suffered a setback as US pharmaceutical firm Eli Lilly said it had suspended the Phase 3 trial of its antibody treatment over an unspecified incident, the second in less than 24 hours after Johnson & Johnson ran into a similar problem.

In Europe, the Netherlands imposed a "partial lockdown" to curb one of the region's worst coronavirus surges, with all bars, cafes and restaurants to close, and non-medical face coverings mandatory in all indoor spaces for people aged over 13.

In Britain, Labour opposition leader Keir Starmer called for a 2-3 week "circuit break" lockdown to slow the rates, saying the government had "lost control" of the outbreak having ignored stringent measures suggested by scientific experts on September 21.

French President Emmanuel Macron is expected to announce tighter restrictions and faster testing in a prime-time TV interview late Wednesday, with some media speculating Paris and other cities could face evening curfews.

Meanwhile China -- where Covid-19 first emerged late last year -- launched a drive to test all residents of Qingdao after a handful of cases were detected on Sunday.

More than four million samples had been collected and 1.9 million results returned as of Tuesday afternoon, Qingdao authorities said, adding that no new cases had been found beyond already confirmed infections.

Chinese officials intend to test the entire city -- around 9.4 million people -- by Thursday.

In scenes contrasting with the fumbled testing efforts elsewhere, health workers in protective clothing swiftly set up tents and residents queued up to provide samples.

As the rest of Europe struggled to contain the disease, Russia also reported its highest-ever number of daily virus deaths, at 244, and a record number of new cases at almost 14,000.

Italy imposed new, tougher rules to control a resurgence, including an end to parties, amateur football matches and snacking at bars at night.

Polish Prime Minister Mateusz Morawiecki became the latest high-profile figure to go into quarantine after coming into contact with an infected person.

In opposition to lockdowns and social distancing, some politicians have proposed letting the coronavirus circulate in the population to build up "herd immunity" -- where so much of the population has been infected there are insufficient new victims for the virus to jump to.

But the World Health Organization has dismissed such plans as "ethically problematic" and requiring mass vaccinations to work.

Furthermore, study published in The Lancet Infectious Diseases journal indicated that exposure to the virus may not guarantee future immunity -- and the second infection could come with even more severe symptoms.

In the United States, President Donald Trump has returned to the campaign trail three weeks before the November 3 election, after being hospitalized with Covid-19. He held a new rally with supporters in the battleground state of Pennsylvanian late Tuesday.

Critics have excoriated Trump for his handling of the crisis, with more known infections and deaths in the United States than anywhere else in the world.

But Trump has been touting his own swift recovery, after being treated with experimental therapeutics at Walter Reed military hospital close to Washington, DC, as a rallying cry to re-open the country.

"I went through it and now they say I'm immune... I feel so powerful," Trump told a cheering crowd in Florida Monday, few of whom wore masks.