Several thousand protestors gathered in Valletta on Sunday afternoon calling for the immediate resignation of Prime Minister Joseph Muscat to ensure justice for the murder of Daphne Caruana Galizia.

The chanting was punctuated from time to time by applause from bystanders watching from the sides. The Labour Party club in Republic Street shut its balcony windows as protestors passed by.

Protestors congregated outside the law courts, by the protest memorial to Ms Caruana Galizia, where a stage displaying two bloodied hands was set up. 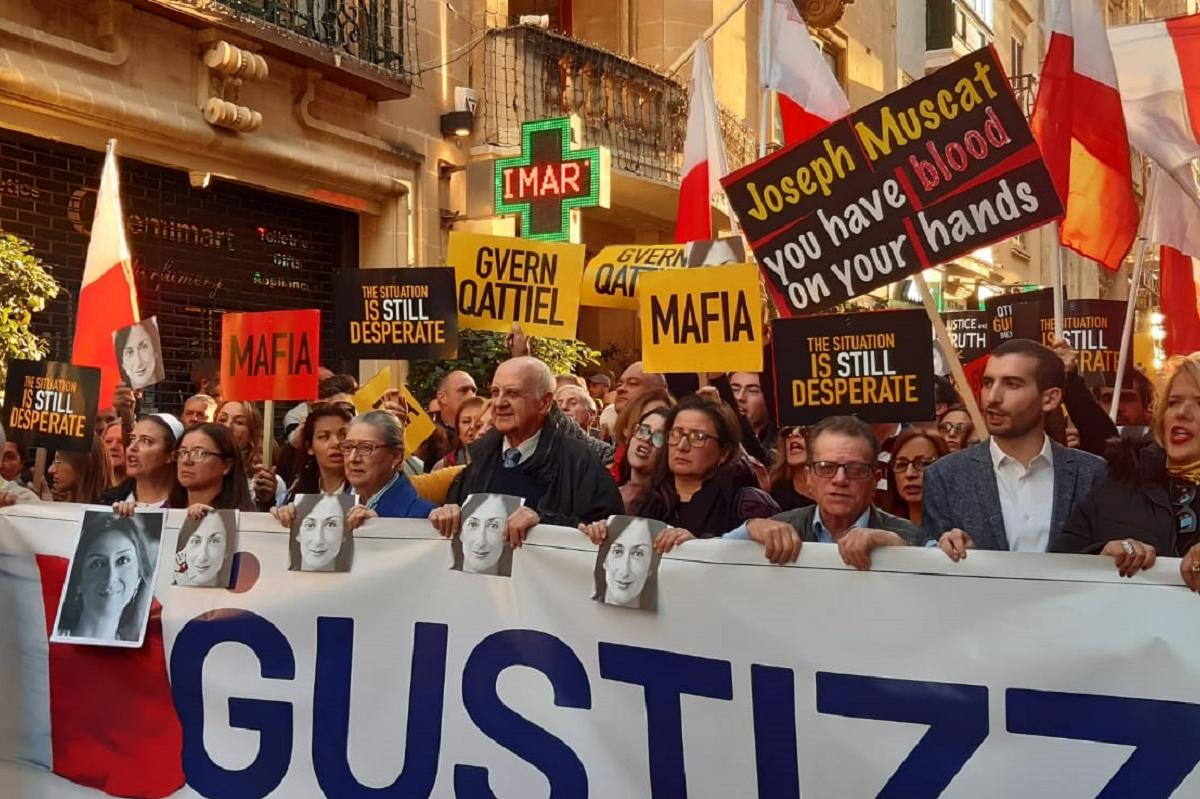 The protest was organised by civil society groups Repubblika, Occupy Justice and manueldelia.com. It was supported by several other groups as well as the Nationalist Party.

Organisers said the Prime Minister would be an "obstacle to justice" for as long as he remained in the post. Another protest has already been announced for Monday evening.

Labour MPs were called for a meeting at the Prime Minister’s summer residence in Girgenti on Sunday morning to discuss Dr Muscat’s expected departure.

Sources said the Prime Minister was expected to remain in his post until the election of a new party leader in January.

'We, free Malta, do not believe in you'

"There are Gozitans, students, youths, those who weren't born here but made Malta their home. Joseph Muscat, leave now," Manuel Delia, one of the organisers told the crowd outside the law courts.

"Welcome, journalists from around the globe. Muscat and the bunch who said are full of confidence in him made you wait for hours today and didnt speak to you. Go tell the world that Muscat is not Malta. Malta is here."

University lecturer and columnist Ranier Fsadni said Malta was "drowning in mud" and that Dr Muscat had lost all credibility.

"We believe in a constitution that says that we deserve a Prime Minister who is loyal to Malta," he said. "We came here to look straight in Joseph Muscat's eyes and tell him: We, free Malta, do not believe in you." 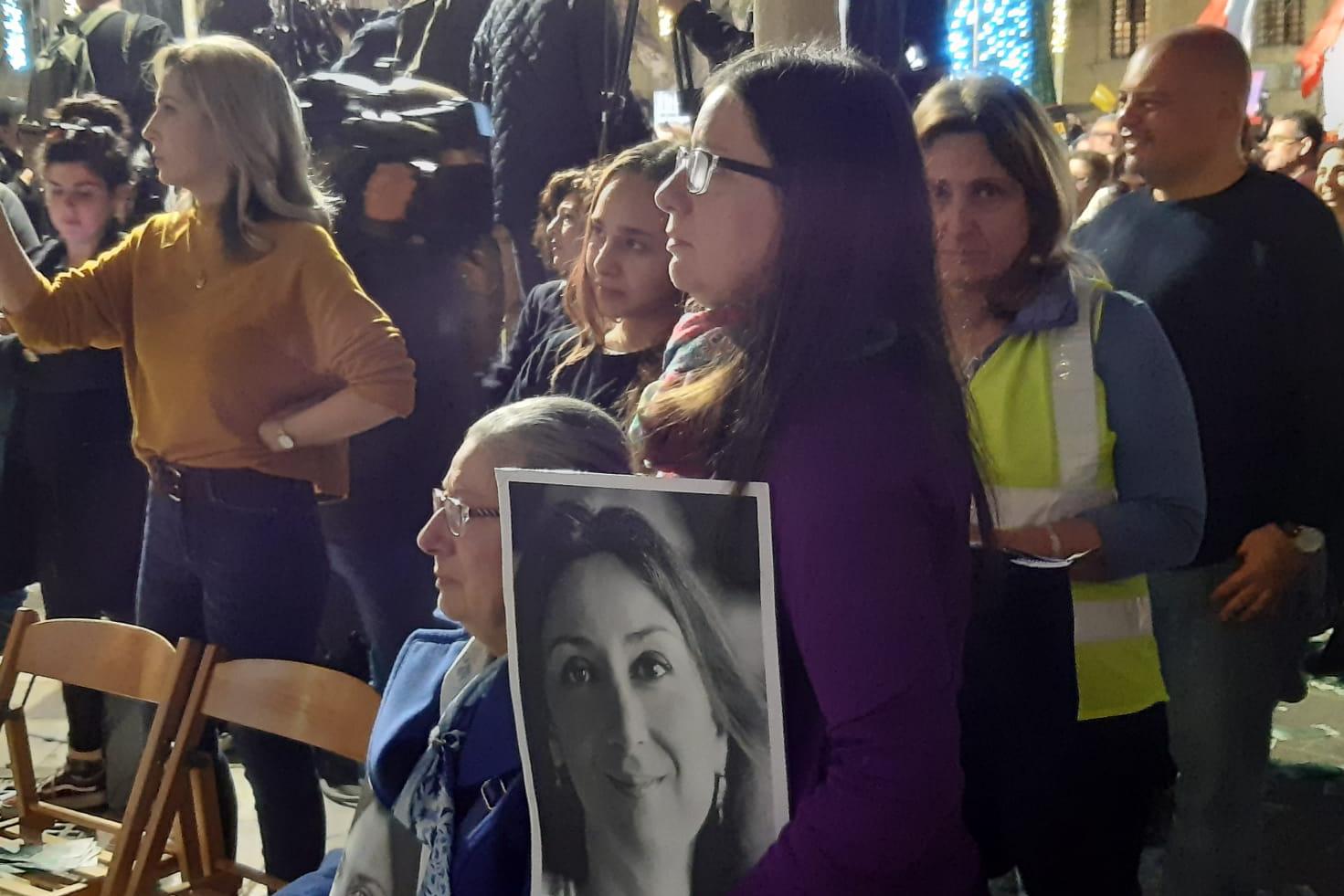 Daphne Caruana Galizia's mother and sister at the protest in Valletta on Sunday.

The country, he said, needed to "rest", and for that to happen, Dr Muscat needed to leave at once.

"We are here as we have heard business owners, people from the financial services, employers and students who are saying you are destroying us," he said.

'Resignations are not enough'

"Take responsibility for what you have done: resign now," she said. "Daphne was not killed by her sons, or by someone who was upset by her words, as you are trying to make us believe. You and your corrupt clique killed her as she was right. How long will you keep hiding your arms when we all know your hands are covered in blood?"

Dr Muscat, she said, had promised a Malta for all, but had "helped in the murder of one of its citizens".

Rachel Williams said several government exponents had in recent days realised they had been "made a fool of".

"Where were you when Daphne was insulted on your media, When you could choose between right or wrong? You are to blame as well," she said, insisting the country would not wait for Muscat's "epiphany" and expected him to leave at once.

"Resignations are not enough," she said, as the crowd chanted 'prison'. 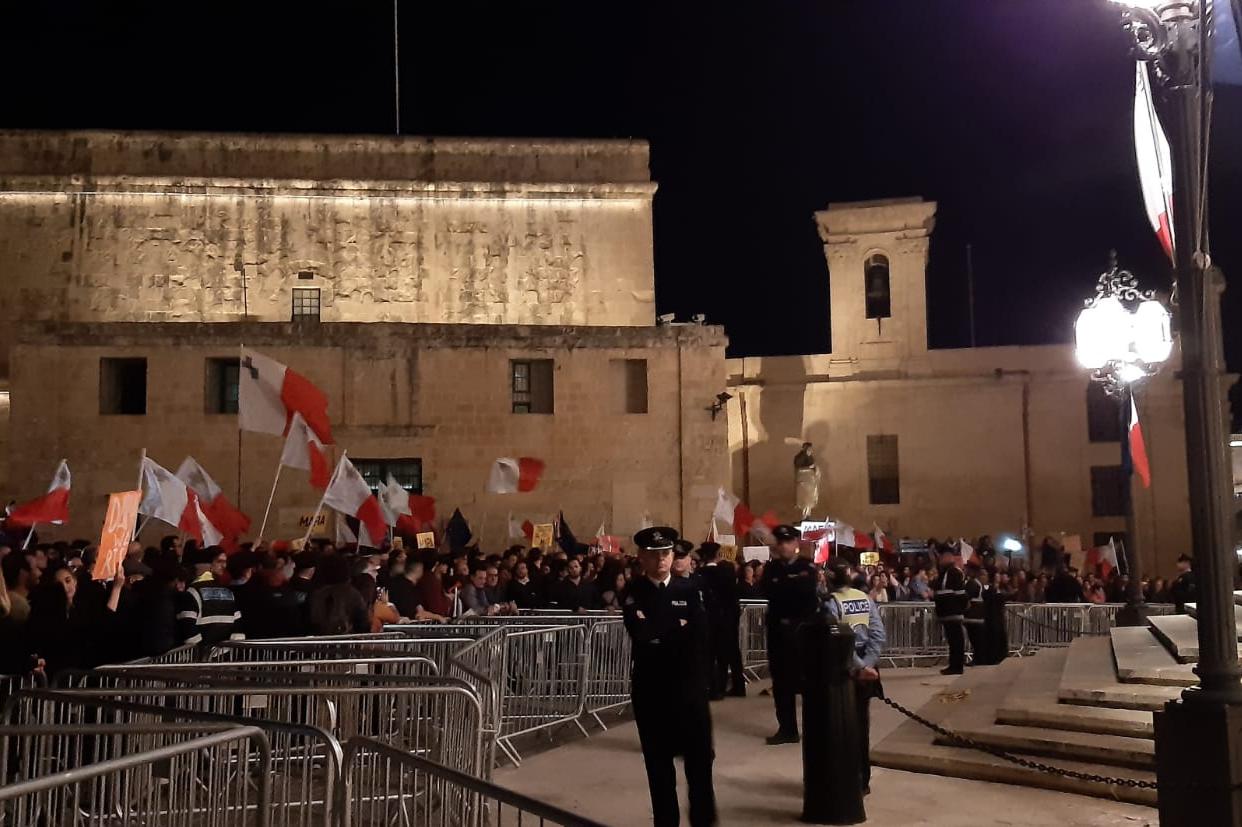 The protest continues with an impromptu demonstration outside the Auberge de Castille.

Alessandra Dee Crespo said Dr Muscat had promised to resign if there was even a whiff of his involvement, but remained in his post despite a "sewage pit" in his office.

"The impunity that reigns in this country killed Ms Caruana Galizia...and you are still running free," she said. "This crowd wants Schembri arrested and investigated, for Muscat to resign immediately; this crowd wants true and full justice, and until there is true and full justice, the numbers will continue to grow. We want justice for Daphne Caruana Galizia and her family."

"We don't expect metaphors from you but action, public action, as it was in the public that you spent six years defending criminals and insulting us, calling us 'negative' and traitors," he said. If you want people to forgive you, you need to act now, not in the future, when you will tell us that you would have done things differently." 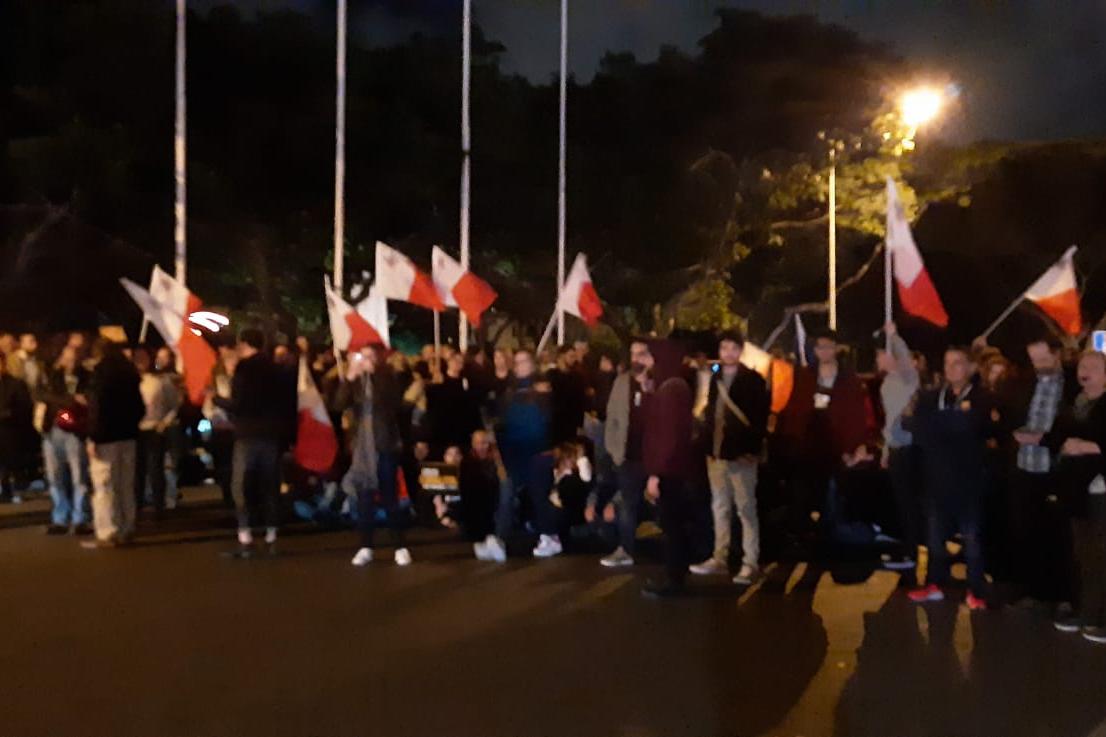 A group of protestors block the street in Floriana.

After the main march wrapped up, several hundred protestors continued on to Castille Square, shaking police barriers and chanting 'barra' ('out') and 'Il-kummissarju pulċinell' ('the police commissioner's a clown').

From there, a smaller group walked down to the war memorial in Floriana, where they staged a sit-in, blocking traffic. At one point, a car joined the protest and blocked off one of the roads leading off the roundabout.

Sunday was the eighth time in just 12 days that protestors have taken to the streets over details emerging from the investigation into Ms Caruana Galizia's murder.

Daily protests have been held since Thursday following the release of the Prime Minister’s former chief of staff Keith Schembri from arrest.