International music festivals drawing thousands of revellers from overseas are heading to Malta this summer, as the country opens its doors to mass events while others across Europe close theirs.

Outlets selling tickets for the events point to “canny” organisers and promoters turning to the island that “currently boasts the fewest active coronavirus cases in the EU”, riding on “a quarantine-free air bridge with the UK”, meaning tourists flying in from Britain will not be required to self-isolate on their return.

“It’s lining up to be a loud one in Malta this summer,” promoters say… with a side note that: “If you’re looking to sneak a peaceful break this year, you might want to give Malta a miss.”

The Tourism Ministry was asked to confirm Malta Tourism Authority funding for these festivals, and to what tune, but no answer was received by the time of writing.

Among the events due to land in Malta is the world-renowned BPM Festival.

Traditionally held in Portugal, the electronic music festival was cancelled this year until the “gem of the Mediterranean” stepped in to “save summer 2020”, according to its promoters. It is now set to welcome thousands of partygoers for a three-day music event in early September to be held at open-air club Uno.

Another festival, Escape 2 The Island, is promoting itself to UK revellers as offering “the biggest names in grime, drill and UK hip-hop”.

The decision to bring the large-scale festivals to Malta comes as many other EU countries have cancelled this year’s festival season, and contrasts with decisions made by local festivals to call off their 2020 events.

Lost and Found and Glitch festivals, which are both fixtures on the local scene, have cancelled their events this summer.

Glitch Festival, scheduled for the Santa Marija weekend, was cancelled back in April, when the MTA informed all big events organisers that it would not fund them this summer, said co-founder Karl Attard.

The idea was revisited when mass gatherings were once again allowed, but it was decided that Glitch would be postponed to next year for safety and responsibility reasons, based primarily on the fact that the festival attracts large numbers of foreigners and to safeguard the future of the industry – “even though, technically, it could have happened,” Attard said.

“All festivals have been cancelled – except for Malta,” he pointed out.

Concerns about the large-scale international events heading Malta’s way have increased in recent days, following a spike in COVID-19 cases linked in particular to a weekend-long Hotel Takeover party.

Industry sources said that that particular event was targeted mainly at locals, in contrast to the international festivals aimed at the UK market.

Since then, organisers G7 and Sound Salon have cancelled their upcoming events indefinitely. 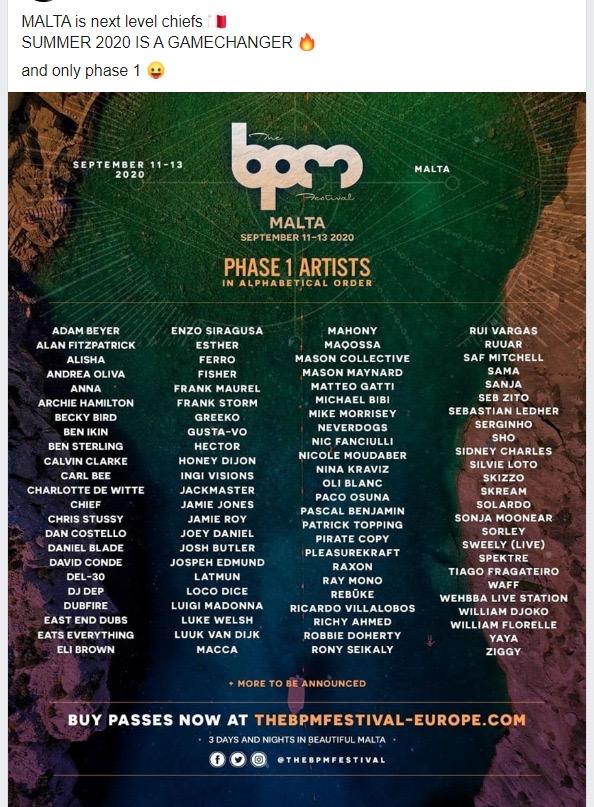 Malta was “taking a major gamble” by stepping in with events that are estimated to attract tens of thousands of revellers from countries where the virus is alive and kicking, and where they are not even allowed to have their own small party, they maintained.

The Malta Entertainment Industry and Arts Association said on Tuesday that it wanted all mass events targeting foreigners called off, saying local players should not be penalised for mass events advertised to revellers travelling to Malta from high-risk countries.

Nevertheless, the Mediterranean clubbing scene seems to be converging on the island, with venues including Uno, Gianpula Village, Café del Mar and the Malta Fairs and Conventions Centre hosting five unrivalled, large-scale festivals from the end of August to mid-September.

The BPM Festival is one of five new weekend-long events landing in Malta this summer, with a line-up that is unsurprisingly huge. All competition has been decimated, both overseas and locally, meaning big numbers can be expected from those who “need to attend festivals”, sources said.

Due to “unprecedented demand”, two more parties at Café Del Mar have been added for those who wish to extend their stay, posters indicate. 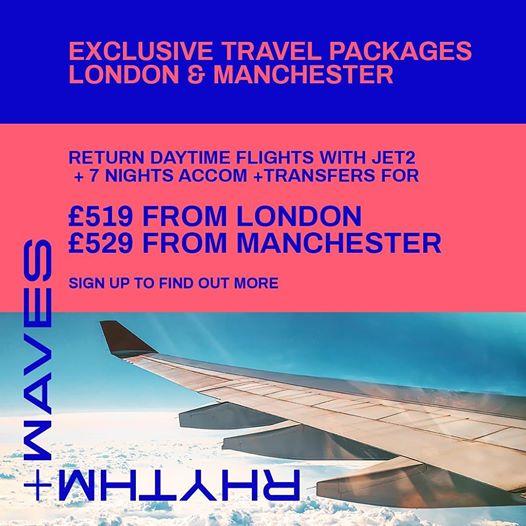 The events are targeting UK partygoers.

Contacted to see if they intended to go ahead, venues that could be reached distanced themselves from the organisation of these events, saying they were just the location, that they were abiding by health authority guidelines, or that it was too early to know what was happening.

MFCC CEO Anita Mifsud said the event at the convention centre – its first since the March partial lockdown – would be outdoors and that tough new guidelines have been established in accordance with the health authorities.

Measures were in place to keep the queue under control on entry, she noted.

Mifsud was unable to say at this stage how many revellers she expected to attend.

Medical associations across the board and several others have called for the immediate ban on mass events, where social distancing and mitigation measures are difficult to implement, in view of the spike of cases stemming from the recent hotel weekend party.

The government has, however, downplayed fears about the rise in coronavirus cases, with Prime Minister Robert Abela saying “panic should not be allowed to replace rational decisions”.

“We will remain open for business,” Abela said on Sunday.

The wave of festivals heading this way…

Malta has seen a spike in cases, in recent days, with the common denominator being large gatherings of people.

Migrants who were rescued and brought to Malta on Monday have been placed in isolation after 65 tested positive for COVID-19.

The Health Ministry said 85 of the group of 94 migrants had been tested so far, of whom 65 were positive. The cluster is the biggest to ever break out in Malta.

The previously record one-day total of new cases – not in a single cluster – was 52, on April 7. That same month, the Ħal Far open centre where many asylum seekers are housed was closed off and the residents quarantined, after a number of positive cases were detected among residents.

Meanwhile, requests for COVID-19 swab tests have skyrocketed from 1,000 calls a day to 10,000, after a series of confirmed cases linked to a large hotel party.

Sources told Times of Malta that the flood of calls to the 111 testing hotline had overwhelmed those manning the lines.

On Tuesday, health authorities said seven new COVID-19 cases were detected overnight. This means that coupled with the 65 migrants cases the number of active cases in Malta has now reached 99.