Revelations about a €4.6 million profit that murder suspect Yorgen Fenech secretly made off the Montenegro wind farm deal has put a spotlight on potential corruption at the state-owned energy provider Enemalta. Jacob Borg looks back at another Enemalta project mired in corruption claims from day one – the lucrative contract given to the Electrogas consortium to build a new power station, in which Fenech played a key role.

Where did it all start?

The idea of building a new gas-fired power station was first pitched by a local businessman in 2009.

At the time, Paul Apap Bologna, a medicine importer and one of the eventual shareholders in the Electrogas consortium, had his plans turned down by the governing Nationalist Party.

Apap Bologna, Yorgen Fenech and Mark Gasan all deny ever discussing the project with any Labour Party officials prior to the March 2013 general election.

However, we now know from court testimony given by Keith Schembri that the “good chemistry” between him and Fenech was reignited in 2010 after the pair had falledn out of contact for a while.

At the time the friendship was rekindled, Schembri had been appointed to head the Labour Party’s working group on energy policy by then opposition leader Joseph Muscat.

An eventual Auditor General investigation into Electrogas would highlight how the power station plans presented to the Nationalist Party by Apap Bologna bore multiple similarities to the project eventually undertaken by Enemalta.

“The National Audit Office (NAO) cannot comment on whether prior agreement had been reached with the Partit Laburista before the general election and if the technical specifications for the construction of the power station set by Enemalta were influenced by parties who had a direct interest in this contract.

“The NAO does not have evidence that supports claims made and is further limited by its mandate, which does not extend its review to political parties,” the Auditor General said in his November 2018 report.

As Konrad Mizzi was thrust into the limelight as the star ‘technocrat’ behind Labour’s pre-2013 election proposal to build a new power station, he admitted Labour had already “tested the waters” and received a “positive response” about a potential investment in a power station project.

We now know there was at least one behind-the-scenes deal by Labour before the 2013 election to help formulate its energy plans, indicating the party was in the market for a new power station as early as 2011.

This all came to light when Energy World, one of the eliminated bidders for the project, filed an appeal in June 2013.

The three-man appeal board heard how Energy World had signed a confidentiality agreement in 2011 agreeing to privately help Labour’s proposal to develop an LNG plant that would reduce energy prices by 25 to 30%.

This board refuted the apparent expectation by Energy World that they should not have been eliminated from the bidding process on the strength of this agreement.

According to the National Audit Office’s report, the appeals board discarded this “claim” as it was deemed unfounded in fact and law, and any expectations that Energy World might have had did not automatically translate into a legal entitlement to be shortlisted.

A look at those appointed to assess the competing bids throws up names of people who were close to government officials responsible for overseeing the project.

David Galea, an associate and friend of then energy minister Mizzi, was appointed as chairman of the Enemalta evaluation committee for the project.

After helping select Electrogas as the winning bidder, Galea would then go on to negotiate contracts with the consortium on behalf of Enemalta.

It did not stop there.

Another familiar name on one of the selection committees is Brian Tonna.

Tonna, along with two employees from his firm Nexia BT, carried out the final assessment between the bid submitted by Electrogas and that of the Endeavor Consortium, the other finalist from the 19 initial bidders.

Nexia BT was the advisory firm that would go on to set up Panama companies for Mizzi and Schembri.

A leaked e-mail sent by Nexia BT in December 2015 said Mizzi’s and Schembri’s offshore structures would receive up to €2 million from Fenech’s 17 Black.

Nexia BT would also go on to audit GEM Holdings, through which Fenech, Apap Bologna and Gasan hold their shares in Electrogas.

The government published heavily redacted versions of the power station contracts in February 2017.

Among the key details blanked out were the financial workings of the contracts.

A massive cache of Electrogas documents, including the full contracts, was leaked to journalist Daphne Caruana Galizia. She never got the chance to fully digest the leaked documents prior to her assassination in October 2017.

Fenech has since been charged with conspiring to kill her.

The Daphne Project would establish in April 2018 that the deal saw Enemalta lose money “hand over fist”, with one energy expert estimating the state-owned energy company paid twice the open market rate in 2017 to buy energy from Electrogas.

A “conservative estimate” by the Auditor General found energy generated by the new Electrogas power plant to be on average €50.64 per unit more expensive than the Malta-Sicily interconnector. Enemalta has disputed these findings.

Warning about Enemalta’s paying over the odds were also sounded internally through Poten, consultants hired by Electrogas to assess the contracts.

Poten raised concerns in the 2017 report that Enemalta might seek to renegotiate contract terms once it noticed the “extra costs” of buying gas at the five-year fixed price.

“The concern is that Enemalta would have direct evidence of the extra costs incurred by buying LNG at a high price in today’s market,” Poten wrote.

The energy contracts steered through by Mizzi obliged Enemalta to buy a minimum of €131.6 million worth of gas from Electrogas each year.

The contract terms, which were kept hidden from the public, state that if Enemalta fails to consume this amount of gas, it still must pay Electrogas the full amount.

A threat by former opposition leader Simon Busuttil to tear up the Electrogas contracts prior to the 2017 snap election saw Fenech express worry that the lenders lined up to offer €450 million in refinancing for the project could get “really nervous”.

The following week would see Labour returned to power after another landslide victory.

At around the same time the e-mail was sent, the government quietly extended a €360 million loan guarantee it gave to Electrogas to help cover the consortium until the refinancing deal had been finalised. 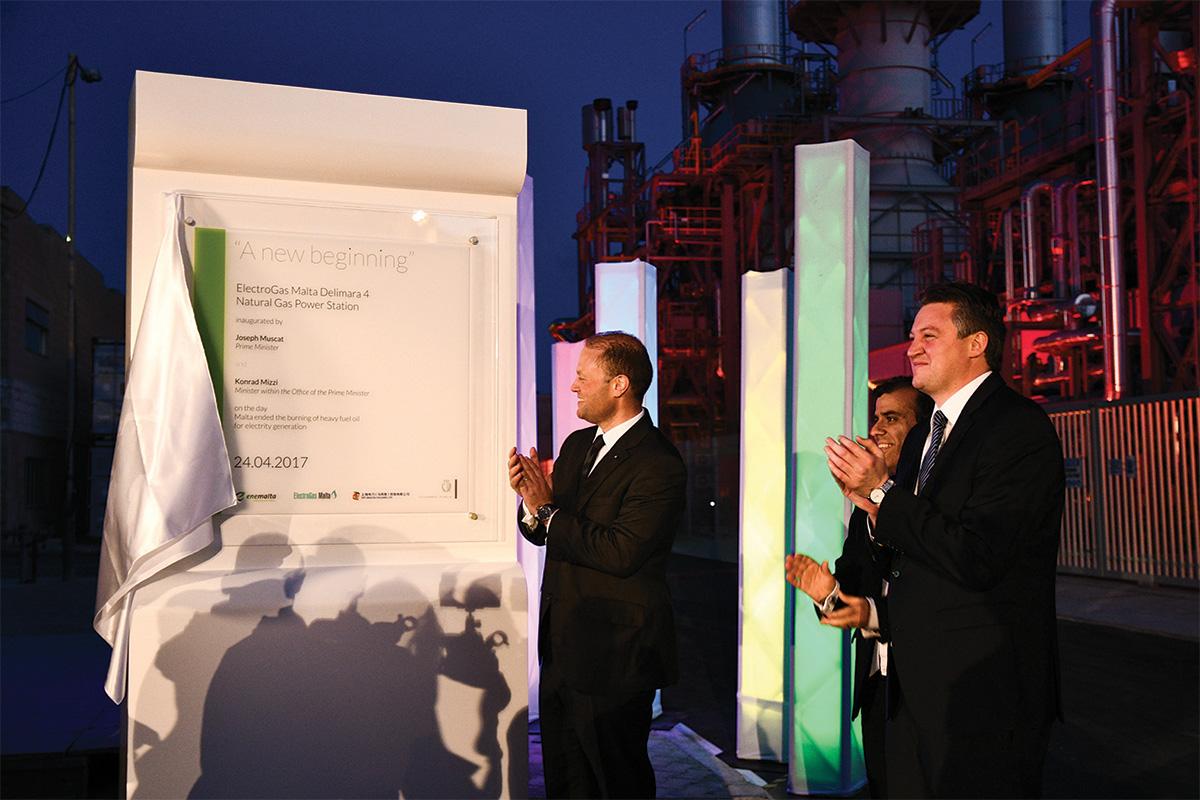 A multi-year investigation into the deal was finally published by the Auditor General in November 2018.

It found Electrogas’ bid did not comply with minimum requirements to win the lucrative contract in “multiple instances”.

In a 500-page report, the Auditor General found various shortcomings in the 2013 selection process that eventually saw Electrogas win the contract.

While the National Audit Office (NAO) said material shortcomings were found in the Electrogas bid and that of the other shortlisted finalist, the Endeavor Consortium, both bids were nevertheless deemed to be materially complete.

The report found that the selection committee only referred matters for legal consideration with respect to the Electrogas submission.

This difference in treatment worried the NAO, which indicated that the level of assurance sought with respect to the bid by Electrogas was not applied in the case of the bid by the Endeavor Consortium.

Despite the “considerable number of instances of non-compliance with the minimum requirements” noted by the stage two evaluation committee, the submissions by Electrogas and the Endeavor Consortium were recommended to proceed to the ensuing stages of evaluation, the AG said.

What was termed as the “late inclusion” of a security of supply agreement guaranteeing the winning bidder minimum revenues and guaranteed revenues was also analysed by the NAO.

It agreed with the European Commission’s verdict that the contracts awarded to Electrogas did not constitute unlawful state aid, and said it did not have differing comments from the Commission about the late inclusion of the security of supply agreement potentially distorting the tendering process, and therefore not assuring the winning bid represented the least cost to consumers.

Although all bidders were informed about the potential security of supply agreement, the nature of the changes and their timing drew the NAO’s concern, for they “drastically altered” the nature of the contractual relationship that was to be entered, rendering the risk to revenue for the selected bidder inexistent.

The Auditor General said all risk was transferred to Enemalta and the government, which were obliged to buy 85 per cent of the annual contract quantity of either power or gas, irrelevant of requirements.

It was in Enemalta’s interest to disclose all conditions favourable to the prospective bidders to encourage competitive tensions between companies bidding for the contract, the NAO said.

The NAO also noted that no mention of the government loan guarantee subsequently given to Electrogas was made in the request for proposals or selection process.

The Auditor General’s report has yet to be discussed in the public accounts committee, 19 months after it was published.

Yorgen Fenech – The self-described lead businessman on the project. A close friend of Keith Schembri. Reportedly told police after his November arrest in connection with murdering investigative journalist Daphne Caruana Galizia that the Electrogas deal was “corrupt”.

Paul Apap Bologna – A medicinal importer who first proposed the project to the Nationalist Party in 2009.

Mark Gasan – Gasan represents the business interests of the Gasan Group in the project.

Konrad Mizzi – Former Energy Minister, who oversaw the project whilst secretly opening up a Panama company.

Brian Tonna – Also on the selection committee. Friends with Keith Schembri. Helped both Schembri and Konrad Mizzi set up Panama companies through his firm Nexia BT.

17 Black – A once-secret company owned by Yorgen Fenech. According to Nexia BT, 17 Black was to pay up to €2 million into Schembri’s and Mizzi’s Panama companies.

Nexia BT – The firm that drew up a feasibility study for the government about the gas-fired power station project. Its members sat on the Enemalta selection committee for the same project, set up Panama companies for Mizzi and Schembri as well as audited the local holding company used by the three Maltese businessmen to hold shares in Electrogas.