Journalist Daphne Caruana Galizia finally has an official memorial to honour her memory, more than four years after she was killed.

A bay leaf tree and an accompanying plaque were unveiled on Saturday morning in Sliema.

The tree is the first official local memorial for the slain journalist, who was murdered in a car bomb in October 2017.

It comes one year after the European Parliament unveiled a permanent sculpture in its Strasbourg building to honour Caruana Galizia and Slovak journalist Jan Kuciak, who was also killed that year.

Locally, citizens who wished to honour Caruana Galizia's memory and reiterate their demands for justice to be done have done so at a makeshift memorial set up at the foot of The Great Siege monument in Valletta.

That memorial was cleared hundreds of times by government employees acting on the orders of then-Justice Minister Owen Bonnici, until a constitutional court ruled that those orders breached protesters' rights.

In a recent interview with Times of Malta, Bonnici apologised for the first time for having "hurt people" with those orders.

The memorial was set up by the Sliema Local Council on the initiative of Sliema’s new mayor, Graziella Attard Previ, in consultation with Daphne Caruana Galizia’s family.

It is located close to the ‘White Shadows’ sculpture at  Fond Għadir, along the Sliema promenade.

Caruana Galizia was born and raised in Sliema, and her son Matthew Caruana Galizia recalls how his mother would explain the meaning behind memorials they would walk past. 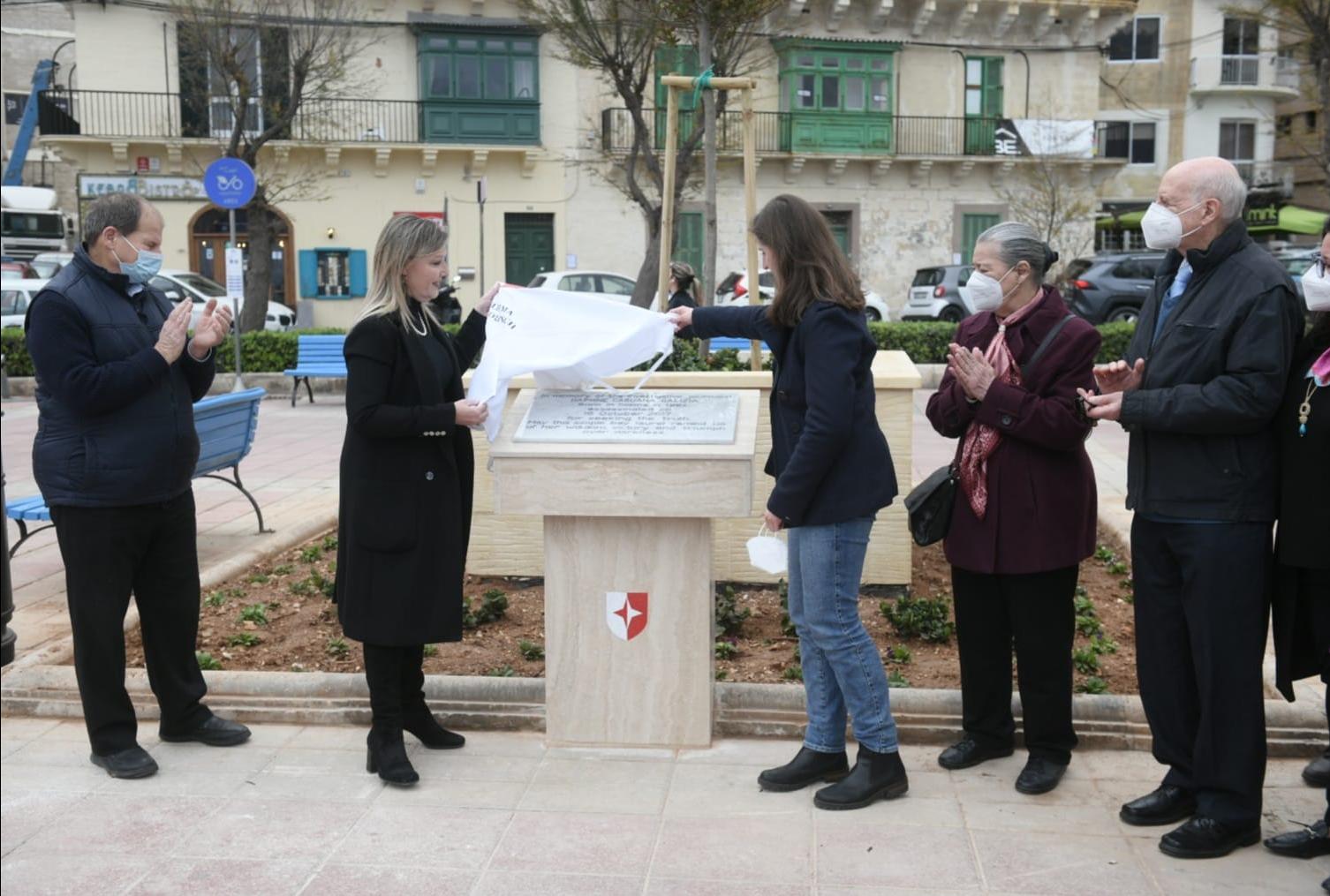 "People are formed through stories. When I was a child and we passed by a memorial, my mum would explain who it was or what happened there," Caruana Galizia told Times of Malta.

"With this memorial I hope parents walking past with their children stop in front of it and take the time to explain, that my mum literally walked the same path as them and they will one day have to fight for the same cause."

He thanked Sliema mayor Graziella Attard Previ for her work on the memorial and making it all possible.

"Most politicians are only concerned with putting their own names on plaques and she's done something that's of real importance instead." 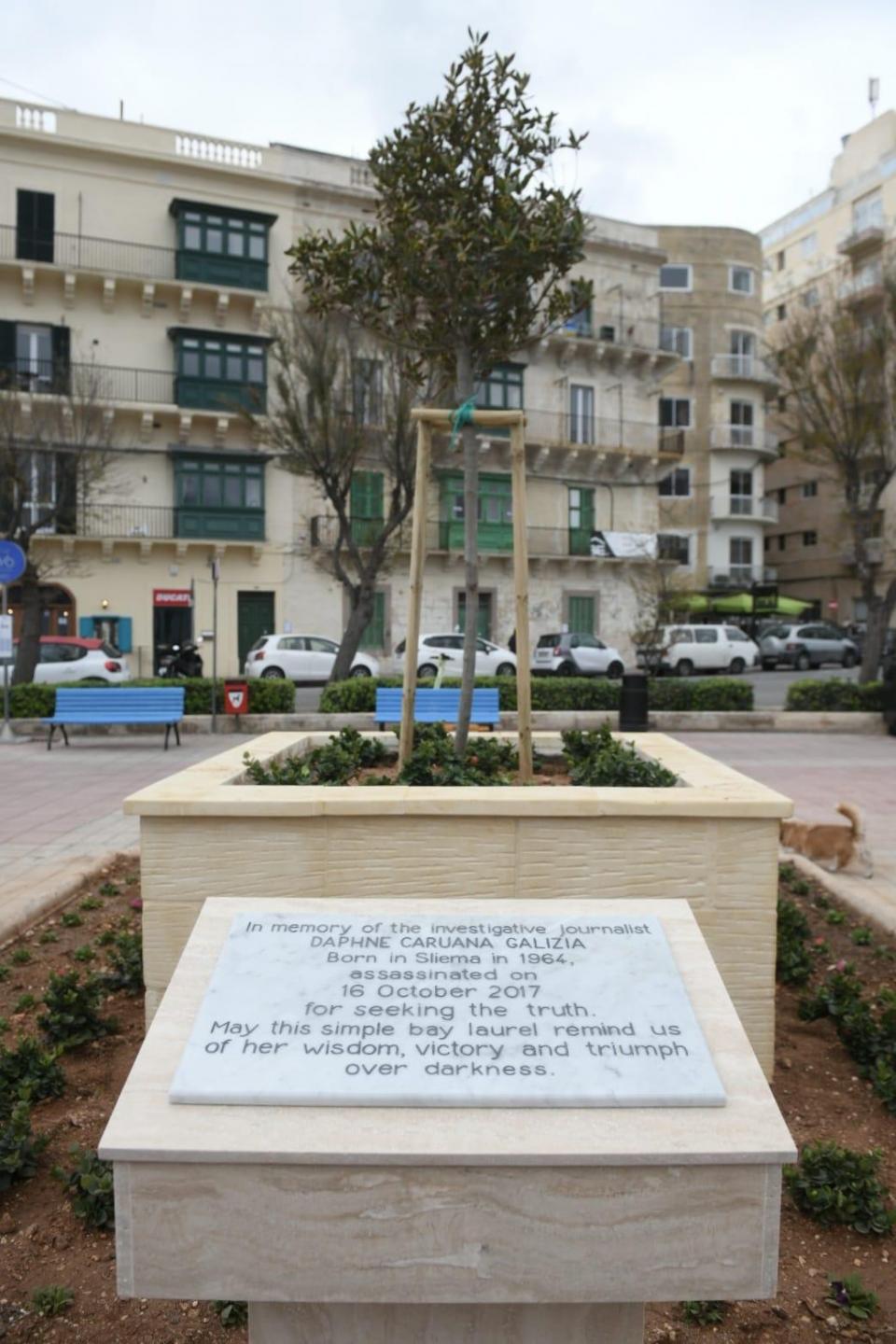 Speaking at the unveiling of the memorial, Attard Previ said the site stands at one of Caruana Galizia's favourite locations in the locality.

“Bay leaves symbolize strength and courage. They are also a symbol of victory and wisdom,” Attard Previ said.

She said Daphne was a trusted investigative journalist who on her own managed to reveal ‘exceptional’ stories, many related to high-level corruption.

“Her victory lies in the fact that everybody knows that Daphne was right. However she paid a heavy price for revealing the truth.”

She said the tree serves as a memorial to Daphne’s perseverance while at the same time it is a call for justice.

“We ask for justice with the hope that such heinous assassination will never happen again in our country.”

One man has admitted to planting the bomb that killed Caruana Galizia. Two others stand accused of that crime. Businessman Yorgen Fenech faces charges of complicity in her murder and is pleading not guilty.

Last year, a public inquiry into the assassination concluded that the Maltese government bore responsibility for her death, having encouraged a culture of impunity to spread throughout government and society.