High-speed winds and rain showers forced organisers of many Good Friday processions to cancel the events with hours to spare, disrupting plans for the first processions since 2019.

Cancellations were announced in:

In Mosta, although the procession was held with quite a few people gathering to watch, the statues stayed inside the Church. 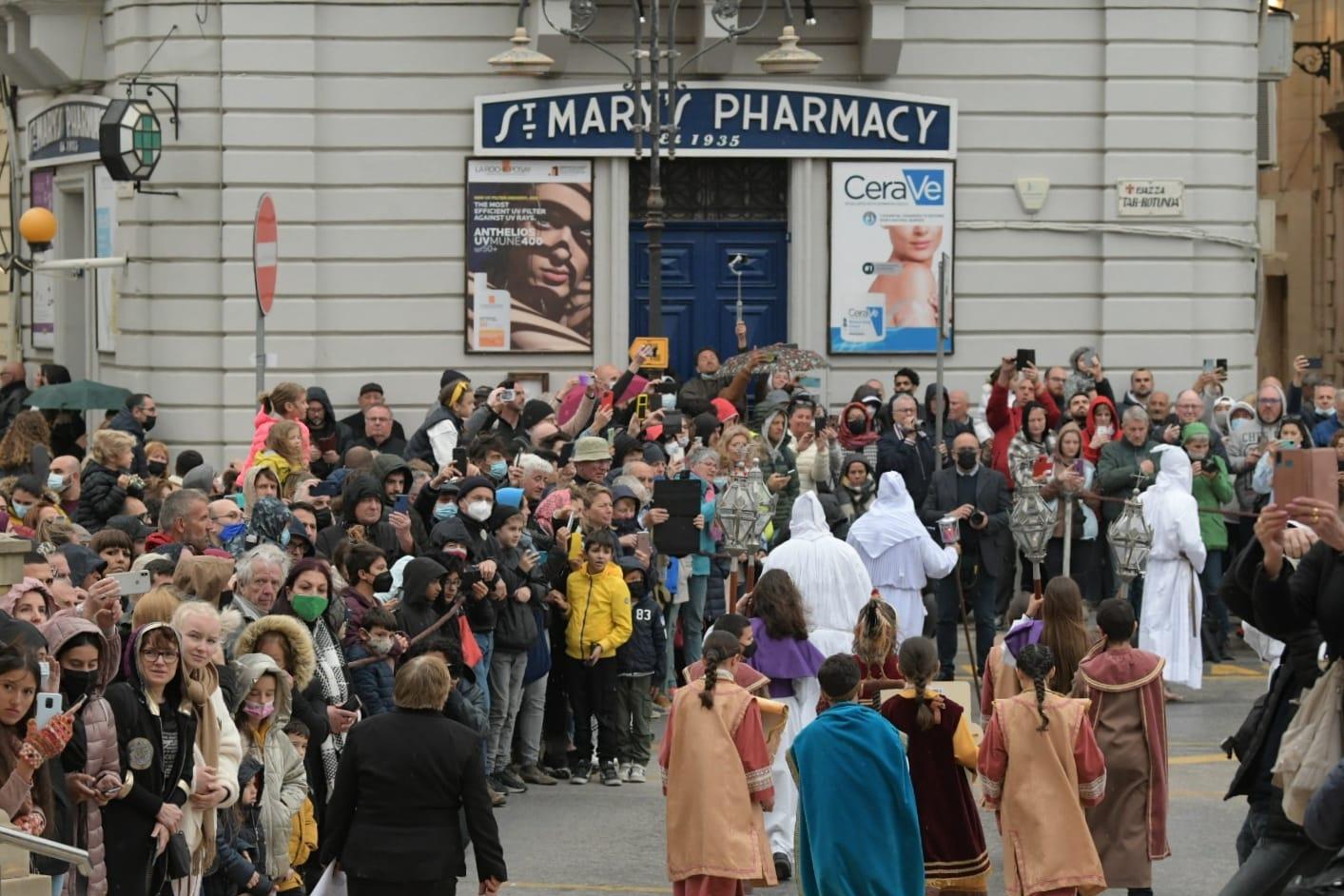 In other towns, such as Cospicua, organisers altered the procession route to spare participants the brunt of the high-speed winds, planned scaled-down events or modified their plans to ensure statues were kept indoors.

The Malta International Airport weather station said it expects East-Northeasterly winds to be ‘strong to very strong’ and reach force 7 on the Beaufort Scale in certain areas. It initially issued a yellow weather warning but upgraded that to orange by the afternoon.

Meanwhile, weather analysts at Windfinder are predicting even stronger gusts of wind reaching up to a force of 9 in the afternoon - right at the time most Good Friday activities and processions take place.

Force 9 winds are classified as 'strong gale' on the Beaufort scale used to classify wind speeds. They can reach speeds up to of 88km/hr and cause slight structural damage as well as high waves in the sea.

Winds could reach up to force 9 on Friday. Photo: Windfinder

Religious feast enthusiasts have been eagerly awaiting the return of Good Friday processions across Malta and Gozo, following a two-year hiatus forced by COVID health restrictions.

A procession in Naxxar was the first to be cancelled due to the high winds.

A similar event in Żebbuġ, Gozo was also cancelled for similar reasons, while Good Friday processions in Rabat and Cospicua were re-routed with hours to spare. Organisers of Rabat's event later cancelled the event altogether, saying they had no other choice.

In Nadur, organisers said the event would go ahead in a scaled-down fashion.

Organisers of the procession planned for Żebbuġ, Malta also called off the plans just after 2pm, with an organiser ruefully saying "we did our best".

In Żejtun, organisers reluctantly called off events, saying they could not guarantee people's safety or ensure items were not damaged by the winds.

By 3pm, organisers in Luqa and Paola had also called off their procession plans.

Qormi's procession, which was keenly anticipated due to plans to unveil a new statue as part of it, was called off just before 4pm.

Organisers in Valletta and Senglea held out hope until the last possible moment but were also forced to cancel their respective processions, announcing that at around 4.45pm.

Mosta's event was due to go ahead until the last minute, when organisers modified plans to ensure procession statues remained indoors, with the faithful instead touring the church to view them.

Earlier, Gilmour Zammit from the Arċikonfraternita tas-Santissmu Kurċifiss had said that organisers of the Ta' Gieżu procession in Valletta were debating whether banners depicting phrases from the Scripture would be taken out or not.

“If the wind gets strong, then they will not make it to the procession,” he said, hours before the entire event had to be called off.

The procession planned in Victoria, Gozo was also called off just before 2pm. Earlier on Friday, Archpriest Mgr Joseph Curmi had said he was optimistic the procession would happen, irrespective of the weather.

“It’s not the first time we have had weather like this during this time of the year, but of course, we want to make sure we will not be putting any person or art piece in danger,” he had said.

Hours later, as the winds picked up speed, he and other organisers had to scrap their plans.

Due to the forecasted weather conditions, this year's Malta International Fireworks Festival has also been postponed by a few days, and will be held on April 20 instead of April 17.