Two brothers arraigned for their alleged role in the murder of Daphne Caruana Galizia have written to the European Commissioner for Justice, accusing the government of a conflict of interest in its assessment of their pardon request because they had implicated a present and former minister.

George and Alfred Degiorgio told Didier Reynders the government had rejected their requests for a pardon because it did not want to hear the information they had on the alleged involvement of former economy minister Chris Cardona in the assassination as well as the involvement of OPM Minister Carmelo Abela in “serious crimes”, including “complicity in armed robbery”.

“There is a serious conflict of interest due to the fact that my clients are offering information showing the involvement of the state in the assassination of Daphne Caruana Galizia and the involvement of ministers of government (previous and current) in other very serious crimes and, hence, the state can never fairly assess any requests made by them,” their lawyer, William Cuschieri,  said in his letter. 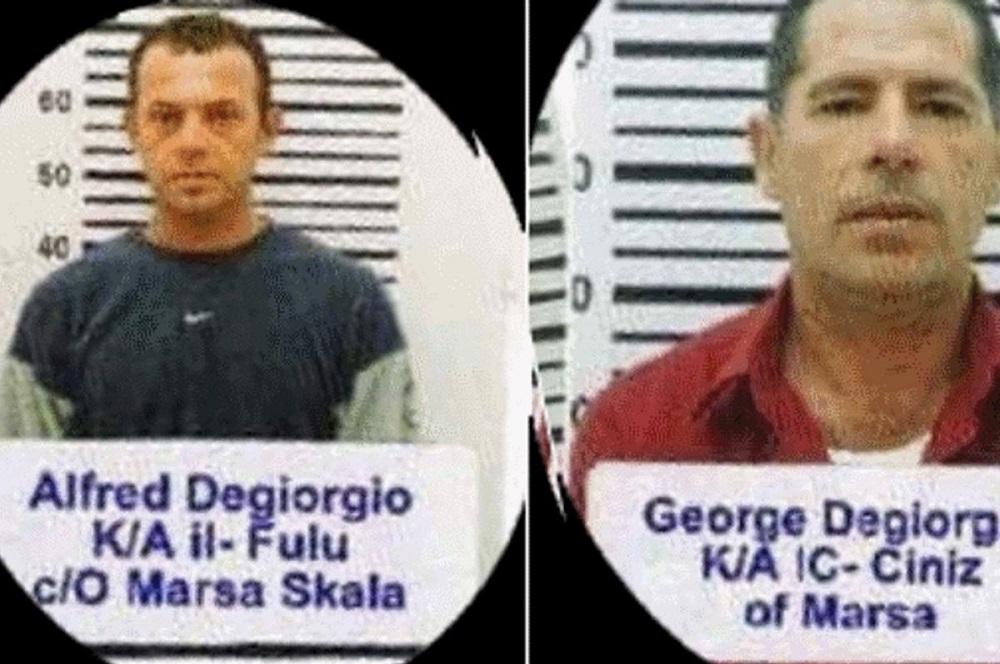 The Degiorgio brothers and Vince Muscat have been charged with planting the bomb that killed the journalist, in Bidnija, in October 2017.

Muscat has since admitted to the murder after he wasgiven a presidential pardon for another crime.

Yorgen Fenech has been charged for his alleged role in commissioning the killing, for which he pleads not guilty.

Cuschieri said his clients were prepared to meet the commissioner or a person of his trust, members of Europol, Prime Minister Robert Abela and the media to explain the details of the information they held as well as to discuss their “genuine concerns regarding the possibility of a vested interest in protecting” the people they had mentioned.

The Degiorgios said they were offering information in exchange for immunity from prosecution, with details of the involvement of both politicians in the serious crimes. 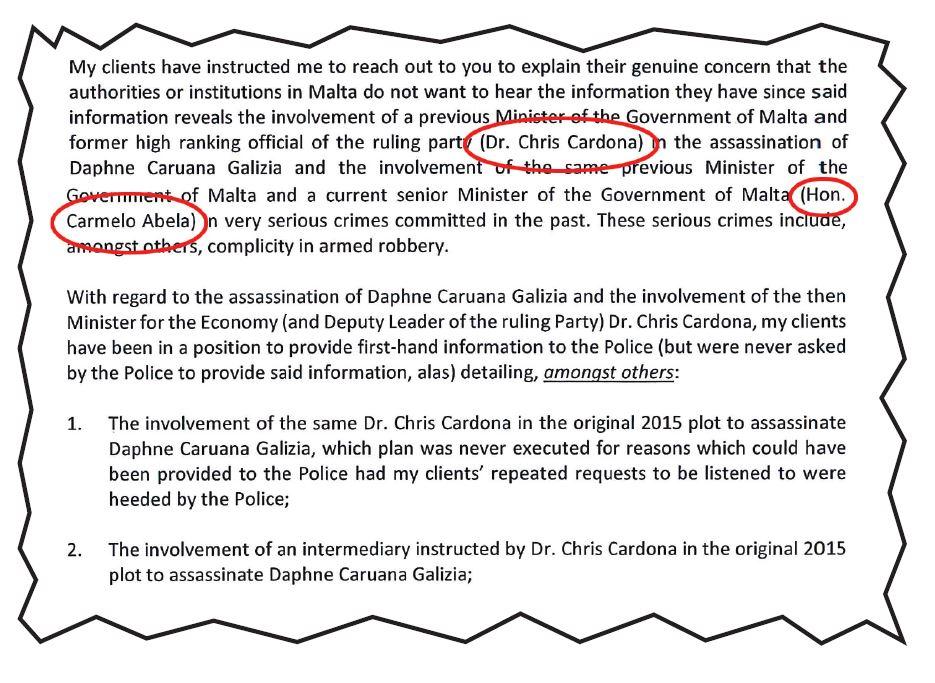 An excerpt of the letter from the lawyer of Alfred and George Degiorgio. Names highlighted by Times of Malta.

On Cardona, the Degiorgios said they were willing to provide details on the involvement of the then Labour deputy leader in what is believed to be a 2015 plot to assassinate Caruana Galizia, “which plan was never executed and which [details] could have been provided to the police had my clients’ repeated requests to be listened to were heeded by the police”.

They also said they had details on the “involvement of an intermediary instructed by Dr Cardona” in the original plot as well as the time and location of a physical meeting held with Cardona and his intermediary.

They also had information regarding the payment which Cardona agreed to fork out for the plan to be executed and the part-payment he actually made to get things moving.

The Degiorgios said they had information on the involvement of Abela and Cardona in other serious crimes, saying they are in possession of evidence showing the “names and details of the masterminds of those crimes”, two of whom were the two politicians and members of the police force.

Referring to the failed 2010 HSBC heist, which resulted in a shootout with the police, the lawyer said his clients had information on the times and locations of preparatory meetings for the planned heist between the politicians, the masterminds and even members of the police force.

They said they also had details on the planned payments from the stolen cash and how this was going to be divided among all those involved.

Moreover, they had “confidential information and equipment” provided by Abela who at the time was the bank’s insurance officer. 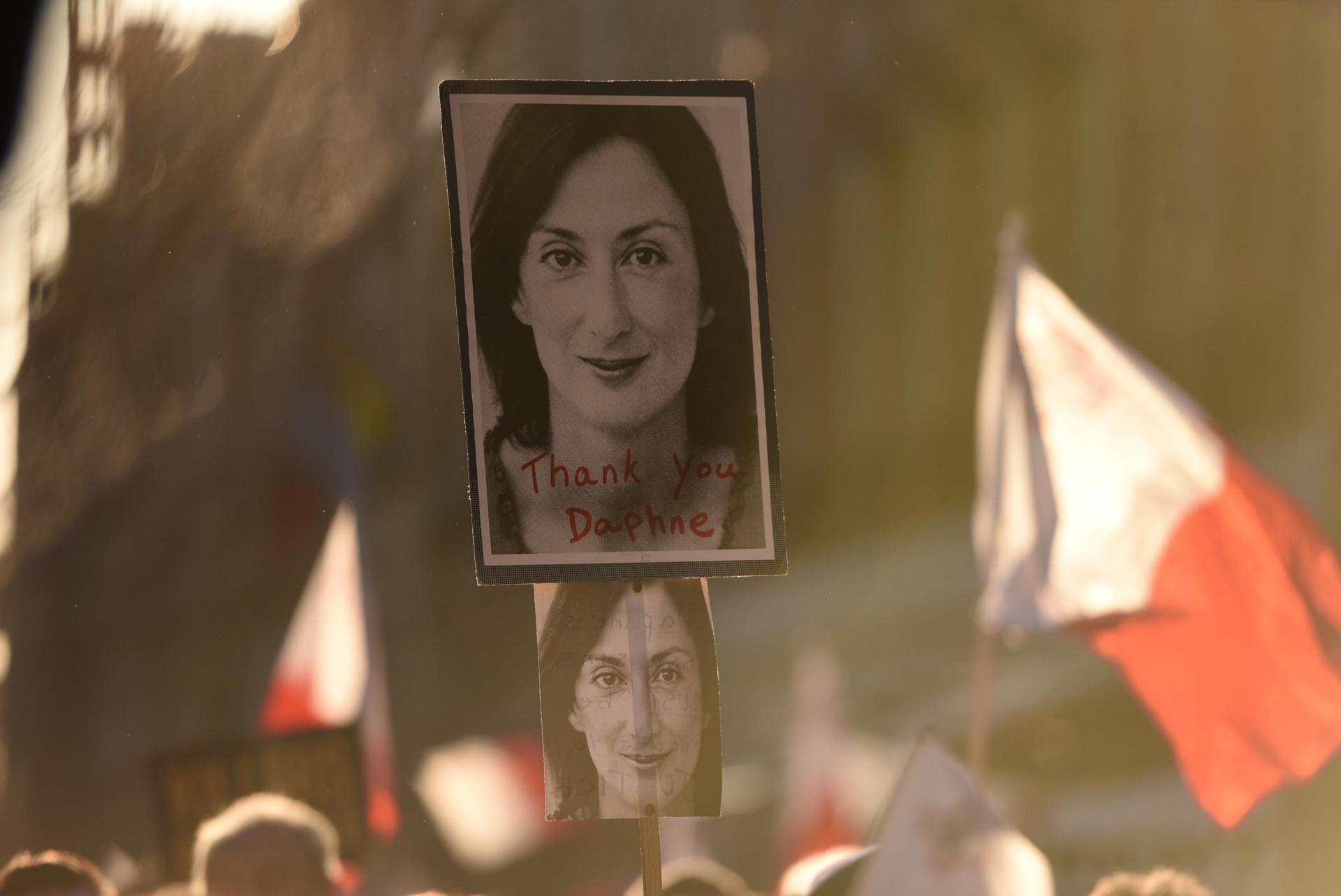 A banner thanking Daphne Caruana Galizia is held by a participant in a vigil commemorating her death.

“These are just some of the concrete informational facts which my clients have been in possession of for some time,” the lawyer wrote, as he requested a meeting to discuss details.

The brothers, however, did not provide any evidence to corroborate their claims about Cardona and Abela.

Cardona on Tuesday again denied any involvement in the crimes being mentioned.

Abela, who was questioned by the police last month after Alfred Degiorgio mentioned his name to the police in connection with the failed 2010 HSBC heist, also reiterated his denial of any involvement in the matter, saying he had “nothing to hide” and wanted the whole truth to come out.

Abela told Times of Malta: “I have already strongly denied these allegations, which are nothing but blatant lies that started being made by (Nationalist MP and lawyer) Jason Azzopardi some months ago.”

He said he was not aware of the communication between the suspects and the EU Commissioner.

“But if this happens, it shows that these alleged killers use the same tactics frequently adopted by the Nationalists, which confirms what I have already stated that the criminals and the PN are in cahoots, intending to attain their respective goals,” Abela said.

Reacting to the news, PN leader Bernard Grech repeated his call for the prime minister to take action against Abela.

He said the least the prime minister could do was dismiss Abela from cabinet until police conclude their investigations.

The accusations being made, Grech said, were unprecedented and the prime minister’s indecision confirmed the need that the necessary decisions are taken on such serious and grievous allegations.

Read the letter in the pdf link below.