The compilation of evidence against alleged Daphne Caruana Galizia murder mastermind Yorgen Fenech resumed on Monday after a long interruption sparked by the pandemic.

Caruana Galizia had been killed for over six months when the self-confessed middleman in her murder, Melvin Theuma, began recording conversations he was having with the prominent businessman.

These were the highlights from Monday's sitting:

Theuma testimony over for today

1.10pm Theuma's testimony concludes for today. He steps down from the witness stand and leaves the court room.

Magistrate says that first court will hear Theuma testify and face cross examination, before moving on to other witnesses.

"We’ve been dragging on for six months with one witness and we do not wish to take much longer," the lawyer says.

The next sitting will take place on Monday, when Theuma's testimony should be brought to an end, magistrate says.

Threats to sue Times of Malta

1.05pm Theuma says that Fenech once told him that he was going to sue Times of Malta.

The middleman says he used to spend entire days with Johann Cremona.

"I used to cry my eyes out, I was going crazy. I used to follow news programmes. Times of Malta were reporting that a gambler was involved. I was driven insane."

12.55pm Azzopardi asks about a photo shown to Theuma, depicting a man who allegedly passed money from Cardona to Degiorgio.

Azzopardi: "Who was this person? Was this person linked to the “350” that allegedly changed hands from Cardona to Fulu? 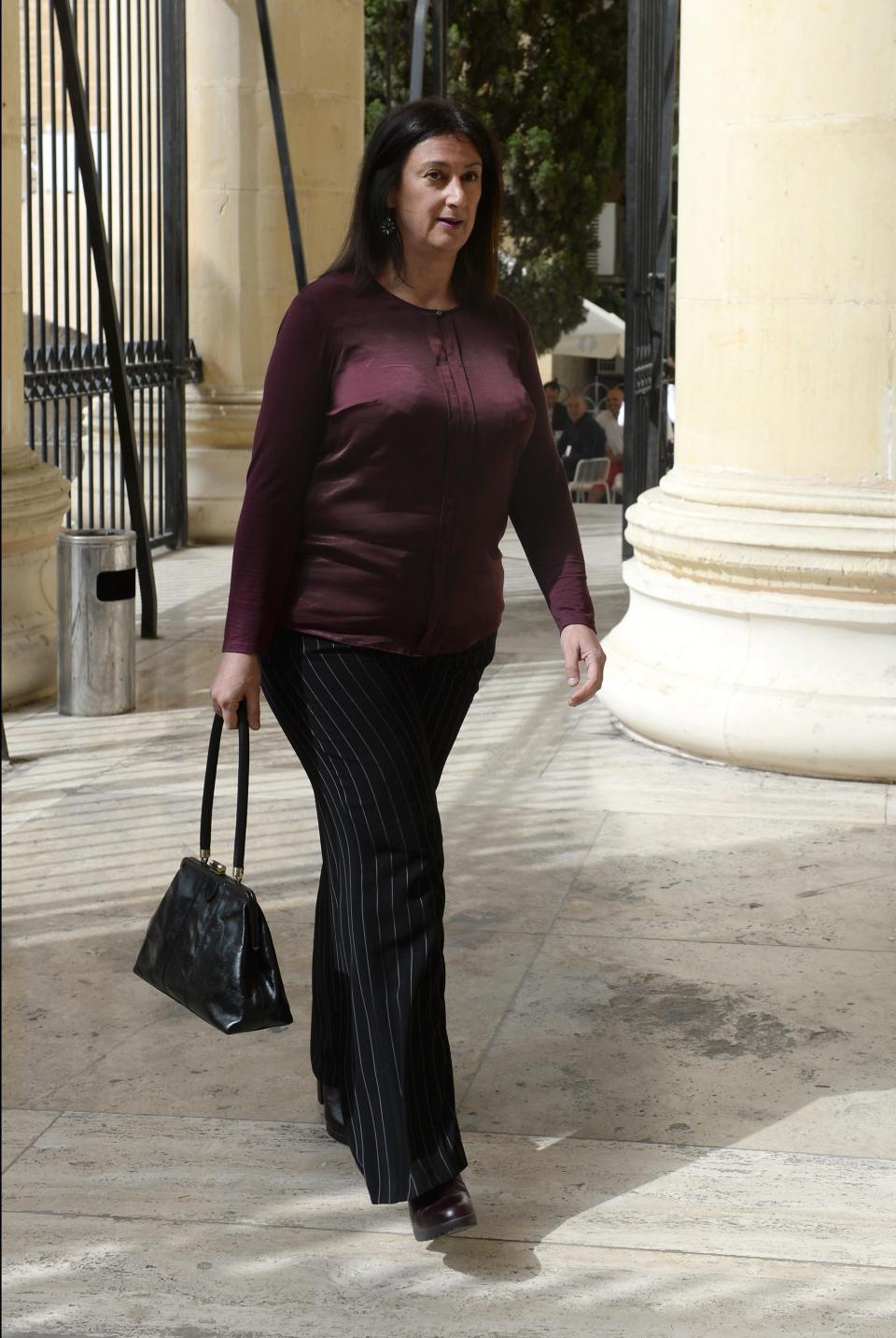 Azzopardi: "Did Mario Degiorgio (brother of alleged hitmen) ever mention someone about a trial by jury?"

Theuma: "Yes. Mario Degiorgio once mentioned David Gatt and told me that until the trial by jury, he needs to prepare 400(000 euros). David Gatt had sent a message with someone that should the Degiorgios pin the blame on Cardona, he would kill them.

"Yorgen also told me that once after court, while in the prison van, the Degiorgios had said “let's link it to Cardona” and the CCF officials overheard them and recorded them. I've never known David Gatt. I didn't know that Gatt and Cardona shared an office."

"Didn’t you find it strange that Fenech told you that he had a mobile phone on which Cardona’s and Fulu’s numbers were only registered?"

Fenech had told Theuma that Chris Cardona had been admitted to hospital after suffering an overdose.

"He was worried because of Daphne's murder. Fenech told me he had swallowed some pills and that is why he was admitted to hospital. He was quite sure of what he’s saying." 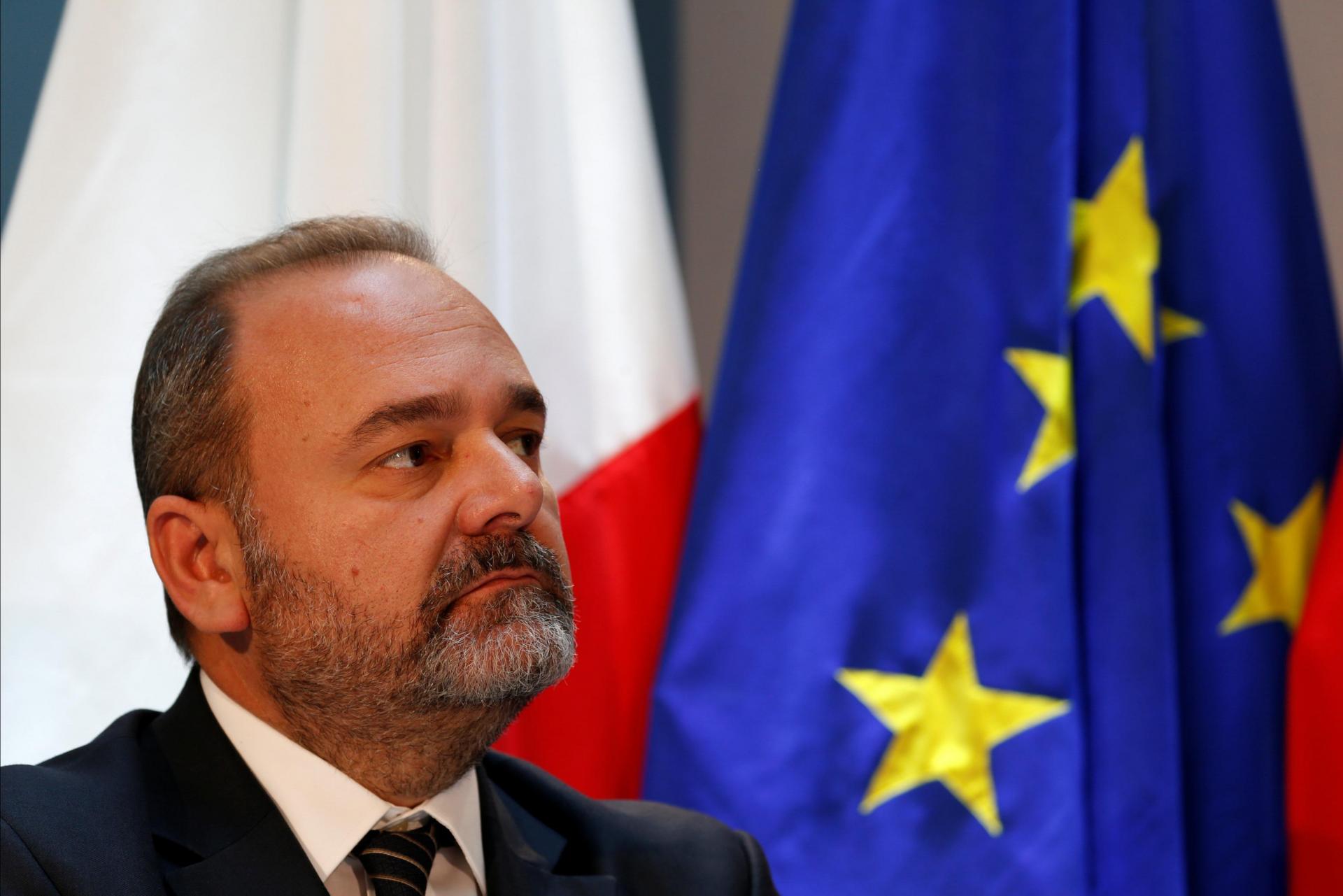 Fenech claimed Adrian Delia also had lunch with him

12.45pm Another time Fenech told him that Nationalist Party leader Adrian Delia had lunch with him.

"Apparently he asked Yorgen if he could show up in shorts. I don't know if Yorgen was lying about that, he possibly did it to brag about his contacts."

12.40pm Lawyer Jason Azzopardi takes over the questioning and asks who he recalls seeing at Fenech's farmhouse.

Theuma says he remembers former police deputy commissioner Silvio Valletta once when he went to deliver bread. He spotted Valletta when the door was opened by he did not walk inside.

A week later while driving Fenech to the airport, the businessman told him: "Valletta recognised you, said your face is familiar."

Theuma says he was upset that a senior police official had made such a claim.

If you’re unfamiliar with the relationship between Valletta and Fenech, here’s a quick recap.

Back in January, Times of Malta had revealed that Valletta had travelled abroad to watch two football matches with Fenech when the business magnate had already been identified as a person of interest in the Caruana Galizia murder investigation.

The matter is the subject of an internal police investigation that was ordered by Home Affairs Minister Byron Camilleri after the Times of Malta report. The revelation had led to the resignation of Valletta's wife, minister Justyne Caruana.

12.30pm Arnaud asks about the reference to Chris Cardona's mobile number. Theuma says it was Fenech who told him the phone had been found at sea near the Marsa potato sheds.

Fenech had told Theuma that Cardona spoke frequently with Alfred Degiorgio, one of the three alleged hitmen.

Theuma had asked Fenech whether "this Cardona business" was true.

Alfred Degiorgio did not want Theuma to visit him at the sheds, so they communicated via a mobile phone.

Fenech knew that Theuma shared a mobile link with Alfred Degiorgio. In fact, he once called Degiorgio in the presence of Fenech while at his Zebbuġ ranch to ask about the murder.

12.10pm Theuma is saying the hitmen took "350" to carry out the murder of Caruana Galizia. It was Johann Cremona (who is involved in the gambling scene) who informed him how much the Degiorgios got paid.

Lawyer Caruana Curran intervenes. He points out that when he last testified, Theuma never mentioned the “350”. He accuses him of citing it now because he had seen the transcript.

Defence lawyer Marion Camilleri intervenes and says it would better to ask Theuma questions and then face him with recordings.

The magistrate replies: "we’re not here to entrap the witness.”

"This is not on," Caruana Curran protests.

Magistrate dictates a note in the minutes of the case, saying that in his earlier testimony, Theuma had made no mention of the “350” but only mentioned it on Monday when faced with the transcript. According to the defence lawyers, this impinged upon the credibility of the witness. 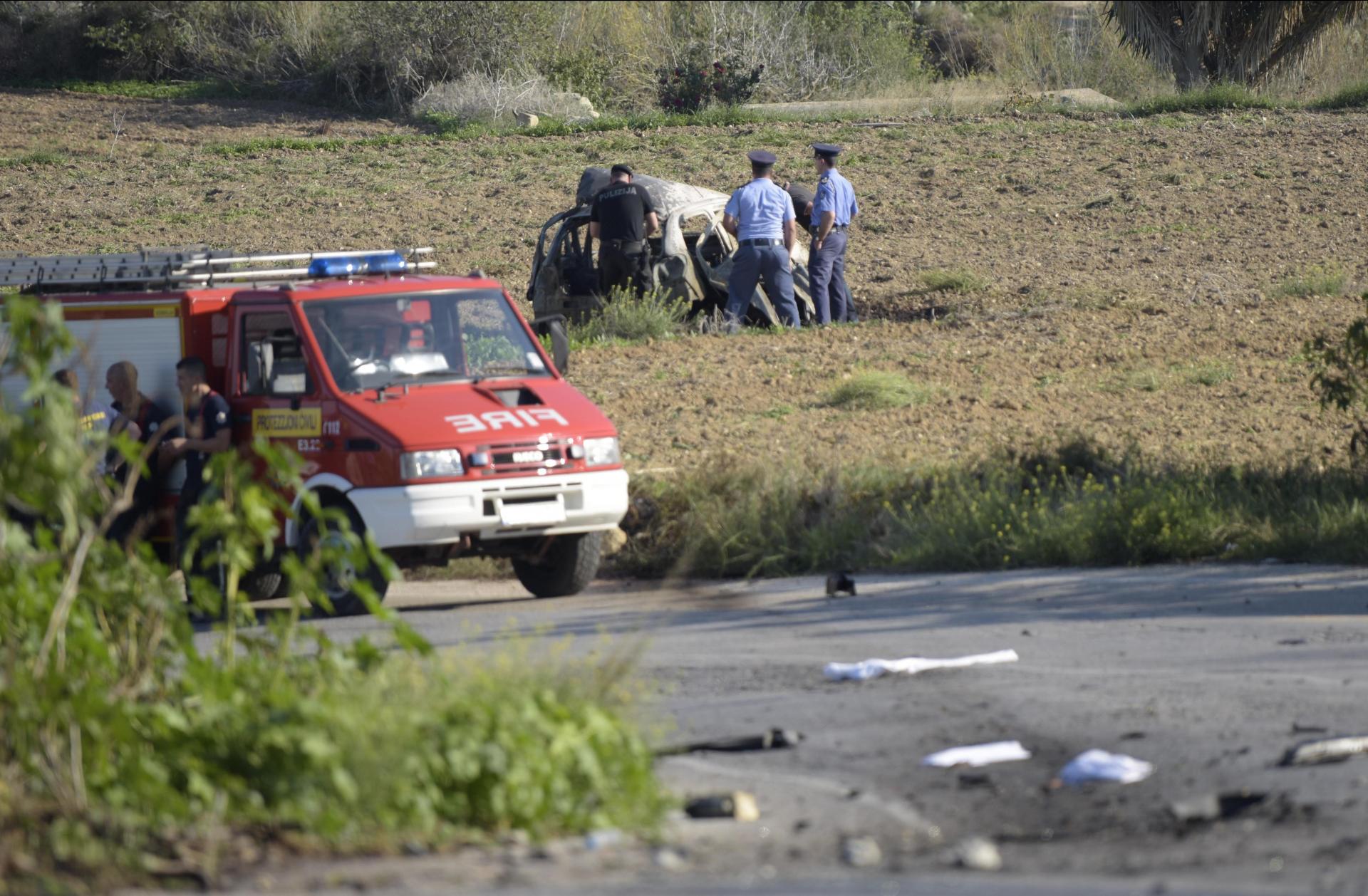 'We shared a mobile phone'

12pm The voice of children and women are heard in the recording. Fenech is heard preparing a coffee for Theuma at a Żebbuġ farmhouse.

At one point, Theuma asks Fenech if he was scared "they'd end up in shit. If we get caught out, is there any sign of solving matters?"

"If they wanted to find the mobile phone, they would have," Theuma says.

Theuma reveals that he shared a mobile phone with Alfred Degiorgio, one of the alleged hitmen.

11.50am The word 'Cardona' and 'number' are heard in the recording. But the context is unclear.

Last February, the court had heard how a mobile phone retrieved from the seabed after the Marsa alleged hitmen arrests contained just one phone number: former minister Chris Cardona's.

Cardona had insisted that the police never questioned him about the claim.

11.45am Melvin Theuma approaches the witness stand. Yorgen Fenech given permission to sit next to his lawyers to be able to follow the transcripts.

The recording is played: there is knocking and a male voice (Theuma) calls out “mgħallem!”

In the recording, Theuma tells Fenech about an incident he had with his taxi as he was driving down Mellieħa hill.

Once again, the recording being aired is not very audible.

But the defence lawyer interjects, objecting to the fact that Theuma's lawyers are given copies of transcripts when he has not yet testified.  But the magistrate says the court had already ordered that Theuma be given access to transcripts.

The middleman in the murder plot is still waiting outside the courtroom.

11am Almost one hour in and the parties are still matching transcripts with audio file labels.

Lawyer Caruana Curran stands up and walks round to Fenech. The two have a brief tete-a’-tete.

The first compilation of evidence in more than three months is already stuck in bureaucracy. But then again, we know the sensitivity of this case.

Family of alleged hitman speaks out

10.45am As we wait, you might want to read Jacob Borg's interview with a relative of Vince Muscat, one of the three alleged hitmen, in Sunday's edition of Times of Malta. 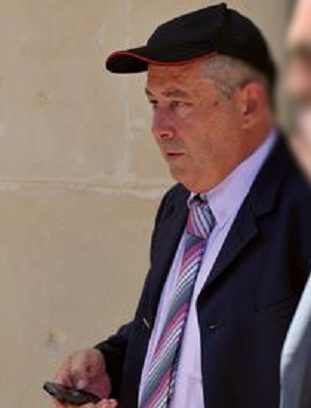 The family slammed a six-month “delay” for a new potential presidential pardon that is believed could seriously implicate others, including prominent figures, in criminal activity.

His lawyer says Muscat has spoken to the police in detail about the Caruana Galizia assassination and a number of other serious, still unresolved cases.

You can read that story here.

10.30am The magistrate refers to the last session on February 20 and the recording about which Theuma had testified on that day. Inspector Arnaud suggests going over one file where the recording had not been so audible last time.

Lawyer Jason Azzopardi says he has noted some omitted words in the revised transcripts.

Two transcribers take the witness stand to present their work. The transcripts were meant to be double checked. They presented 128 files of which over 40 hours were blank recordings.

Copies are handed out to all parties.

We should be hearing the recordings soon but this could take some time. The magistrate’s deputy is going through the thick pile of papers, reading out file title and allotting number.

All set to go

10am Yorgen Fenech is seated in the court room, with lawyers Gianluca Caruana Curran and Marion Camilleri seated in front of him.

The victim's relative Matthew Caruana Galizia and Corinne Vella are seated at the back. Everyone, from lawyers to the accused to the police, is wearing a mask.

Because of the COVID-19 restrictions, Monday's case is taking place inside Hall 22, the largest hall where trials by jury normally take place. Journalists are sitting on the side normally reserved for jurors, with cling film spacers between them.

Magistrate Rachel Montebello takes her seat, wearing a visor too.

Just to bring you up to date with the developments with the last hearings in February:

Fenech was arrested last November as he was about to leave Malta on board his luxury yacht. You might want to read the story behind that dramatic arrest here.

Theuma, a taxi driver who claims to be the middleman in Caruana Galizia’s murder, has been granted immunity from prosecution in exchange for his testimony.

Caruana Galizia was murdered in a car bomb in October, 2017.

Lawyer Nadia Attard from the AG's office will be assisting the prosecution.