Wearing dust masks and brandishing placards and plants, protesters gathered in Valletta on Saturday morning to march down the capital in a demonstration against excessive development and environmental exploitation.

Mr Flask, a member of protest organisers Moviment Graffitti, was one of several speakers to slam Malta’s two major parties as being complicit in the destruction of Malta’s environment.

“Both of you are guilty,” he said with reference to the Labour and Nationalist parties.

“The sins of one party do not absolve the other”.

Organisers estimated that around 3,000 people showed up for the protest, which was backed by roughly 70 different civil society groups.

Others who spoke to Times of Malta were more conservative, estimating around 2,000 had shown up.

While it was hard to verify the exact number, the size of the crowd visibly grew as the protest snaked through Valletta from its 10.30am start by the law courts.

At one point, as the audience strained to hear speeches from a stage set up outside the parliament building, one attendee  – academic and activist Vicki Ann Cremona – approached the stage.

If we have a Planning Authority, why do we have this chaos?- Ingram Bondin

“People at the back can’t hear you,” she told the people scheduled to give speeches. “Speak louder”.

Ramblers Association member Ingram Bondin posed a rhetorical question which seemed to reflect the disillusion of many of those present in Valletta on Saturday.

“If we have a Planning Authority, why do we have this chaos?” he asked, before going on to offer an answer.

“Our laws were designed to be faulty, to allow developers to sneak through the window and get what they want”.

A summer of discontent

The protest came at the tail end of a summer which might well be remembered as the moment when murmurs of environmental discontent reached a crescendo.

As construction irritation simmered, opposition to road widening projects began to bubble. In July, a group of activists tied themselves to trees in Attard in protest against the Central Link project, which will see more than 500 mature trees uprooted and around 250 more transplanted.

'I saw my childhood home collapse'

Victims of construction site collapses have said that they feel abandoned and helpless after being forced out of their homes. Two of the victims were present on Saturday, marching and calling for an end to the impunity.

"I saw my childhood home collapse before my eyes. My rights were taken away for the financial gain of others," Anthea Brincat, who lost her Guardamangia home in June, told the crowd.

"I have no home. Contractors and developers have redress, while we have none". 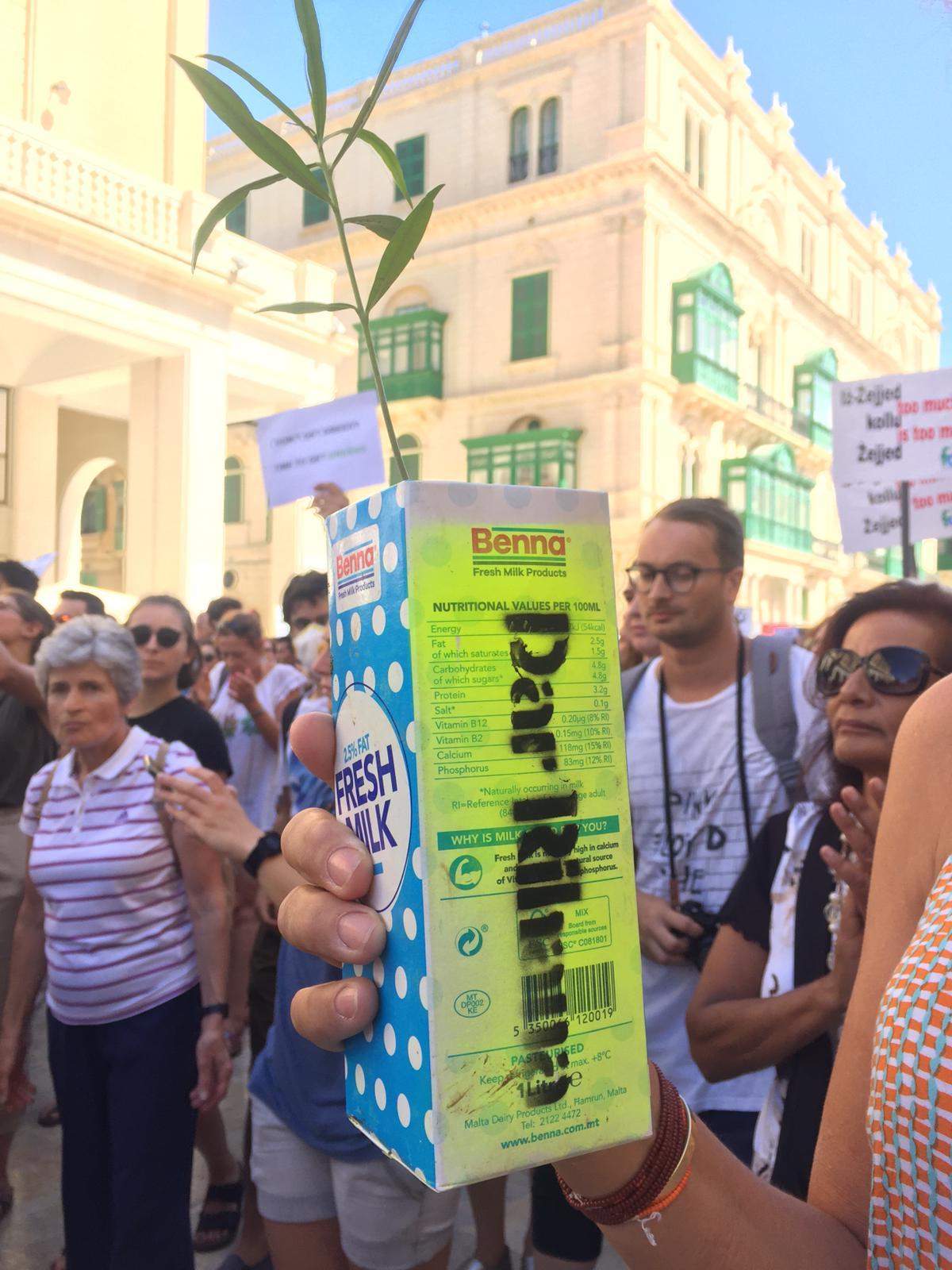 Plants in milk cartons: a symbol of the resistance. Scroll right to see more photos. 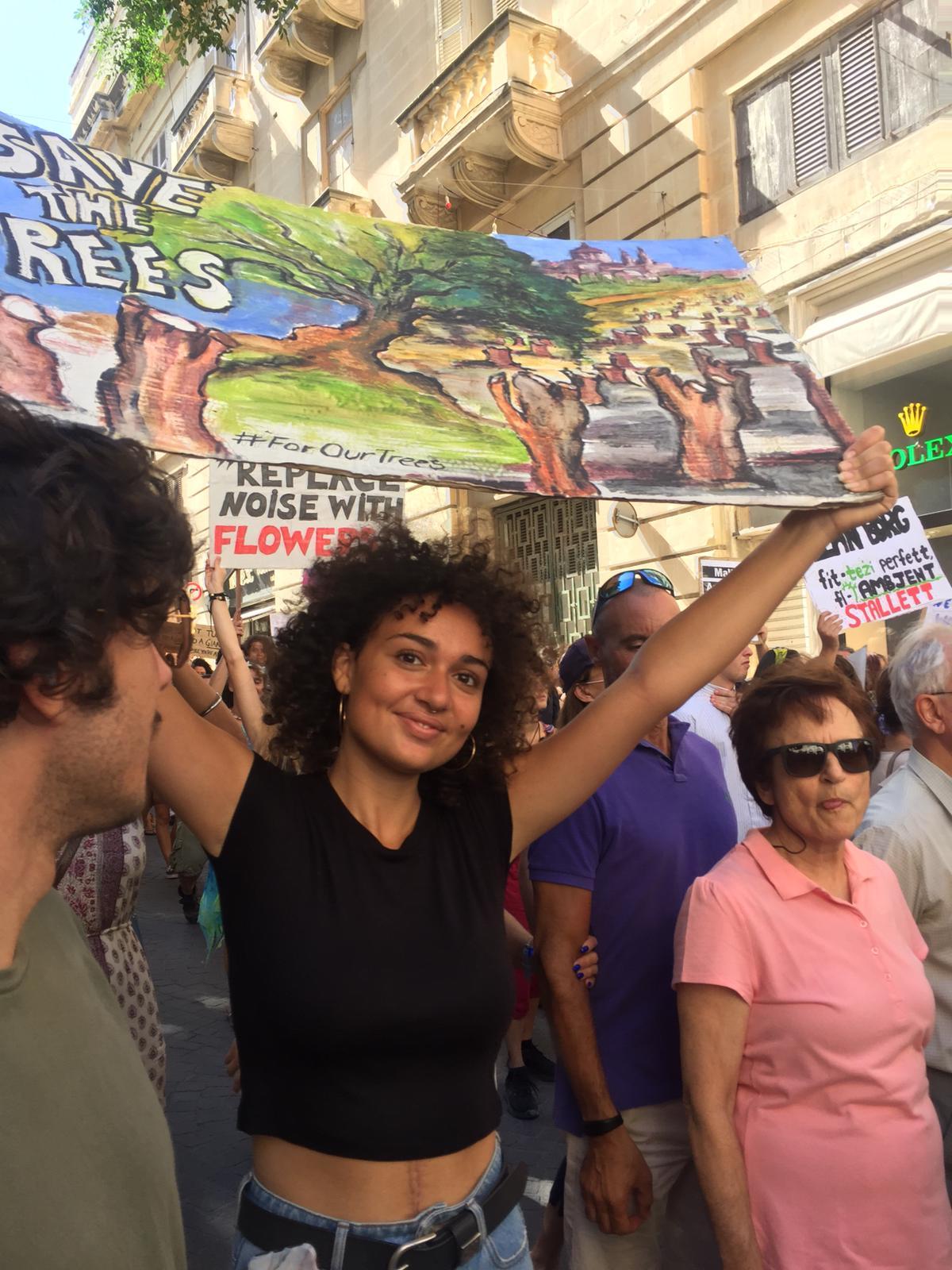 Sasha Vella, who led a protest against the Central Link project. 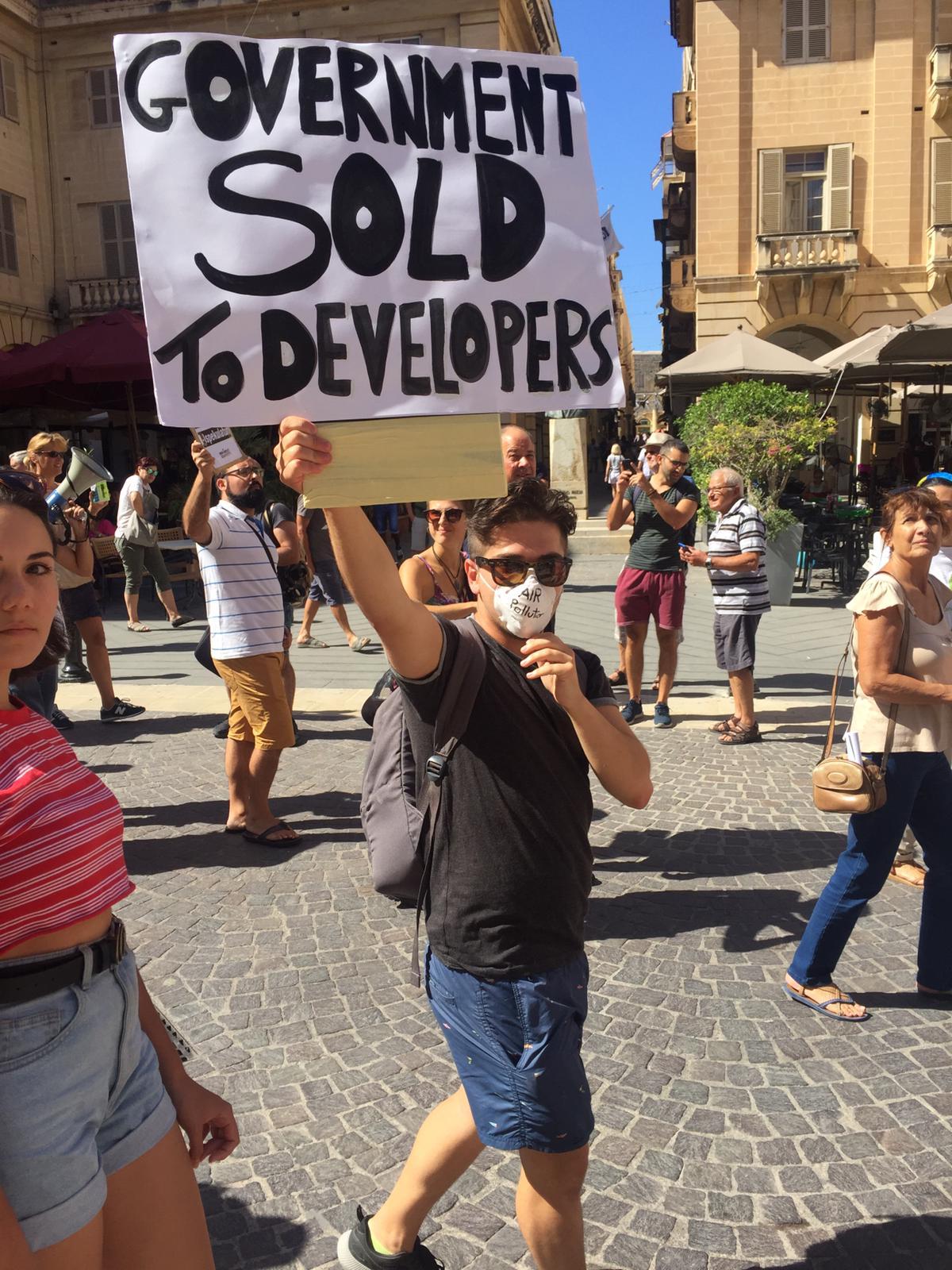 Ms Brincat offered up a minute of silence to a fellow victim, 77-year-old Maggie Smith.

Ms Smith died just two weeks ago and two months after her Mellieħa apartment crumbled as she lay in bed.

Some chose to attend holding little plants growing inside milk cartons, as a symbol of the nature the protesters fear is being trampled on by rampant overdevelopment.

Many of the placards were fashioned out of recycled cardboard and reused cereal boxes.

As they marched, frantic drumming led the crowd into chants of  “iż-żejjed kollu żejjed”.

“Nimxu ghad daqqa ta l-izvuppaturi,” they cried out [‘We march to the beat of developers’ drum]. “Għajjejtuna” [‘You’ve tired us out’].

At one stage, a police officer keeping watch spotted an acquaintance among those marching; the two exchanged a friendly pat on the back and moved on.

On the fringes of the crowd, clusters of bystanders looked on with interest as the protest zig-zagged into Merchant’s Street and then back down to Republic Street, reaching parliament right at the entrance to Valletta.

Two high profile Labour figures on Saturday weighed in on the protest.

Environment Minister José Herrera on Saturday said he had "taken note" of the protestors' concerns, while MEP Alfred Sant backed the protest march.

In a tweet, the minister said that while the government was committed to delivering its electoral programme, it was "important to continue listening to the public.”

And, in a Facebook post uploaded before the protest kicked off, the former prime minister said that no matter how great or small it would be, the event's goals were valid and necessary.

Dr Sant said this was especially true of the calls for a moratorium on large projects, and the need for better construction and planning rules.