The Daphne Caruana Galizia murder case took a major step towards closure in 2019. Ivan Martin looks back over the key developments.

February 17: Times of Malta quotes senior police sources who insist they need to gather more “rock solid evidence” before interrogating and proceeding against a number of suspects believed to be closely connected with Caruana Galizia’s assassination. The story comes amid growing concerns that the case has hit a brick wall.

June 26: A damning report condemning the state of rule of law in Malta and raising concerns on the investigation into Ms Caruana Galizia’s murder is overwhelmingly approved at the Council of Europe. The report’s recommendations call on the government to establish a public inquiry into the assassination within three months.

September 20: Joseph Muscat announces the public inquiry into the murder. The inquiry is to be concluded within nine months and published as directed by the same commission. Within hours, the Caruana Galizia family requests a meeting with the government over the composition of the board. 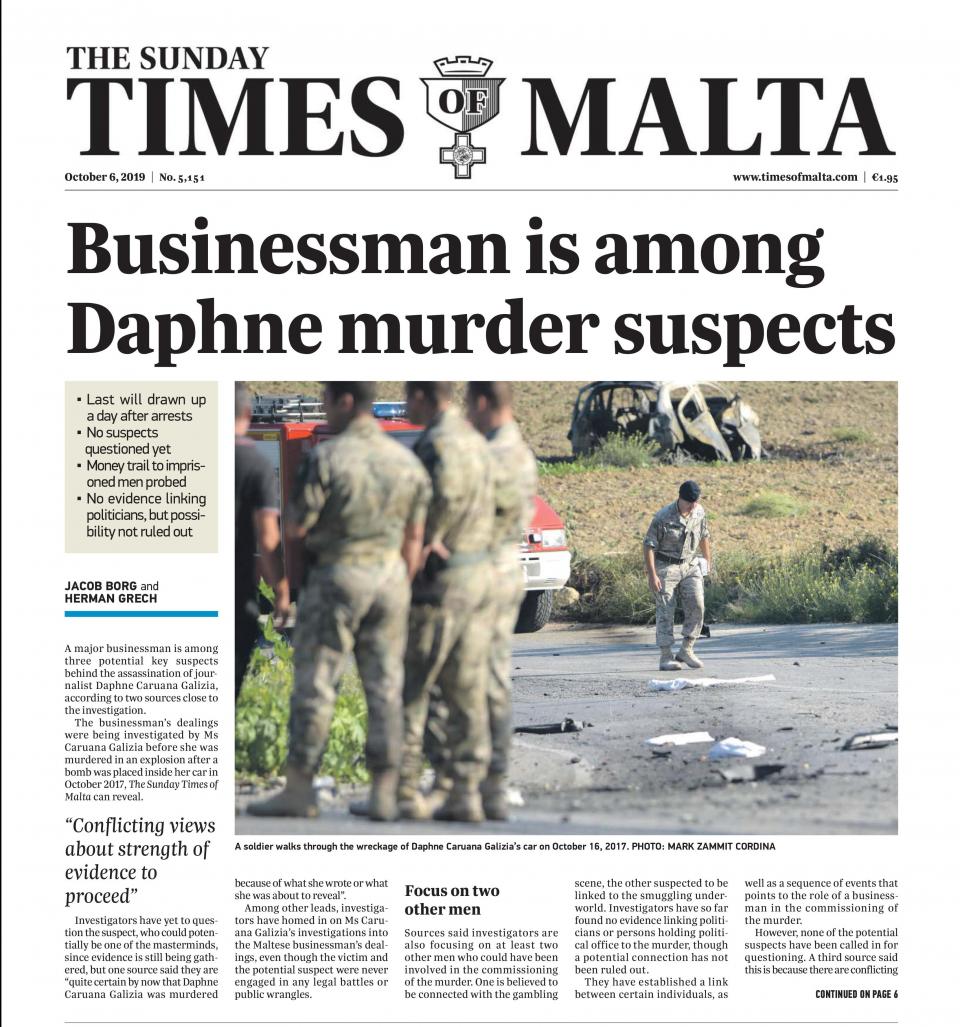 October 6: Times of Malta reports that a “major businessman” is among three potential key suspects behind the assassination and provides new revelations about the probe. The story comes a full year after the newspaper first exposed how police had established who they believed had masterminded the assassination.

November 15: The government announces two new members to the board presiding over the public inquiry into the murder. The inquiry’s terms of reference are also significantly broadened. 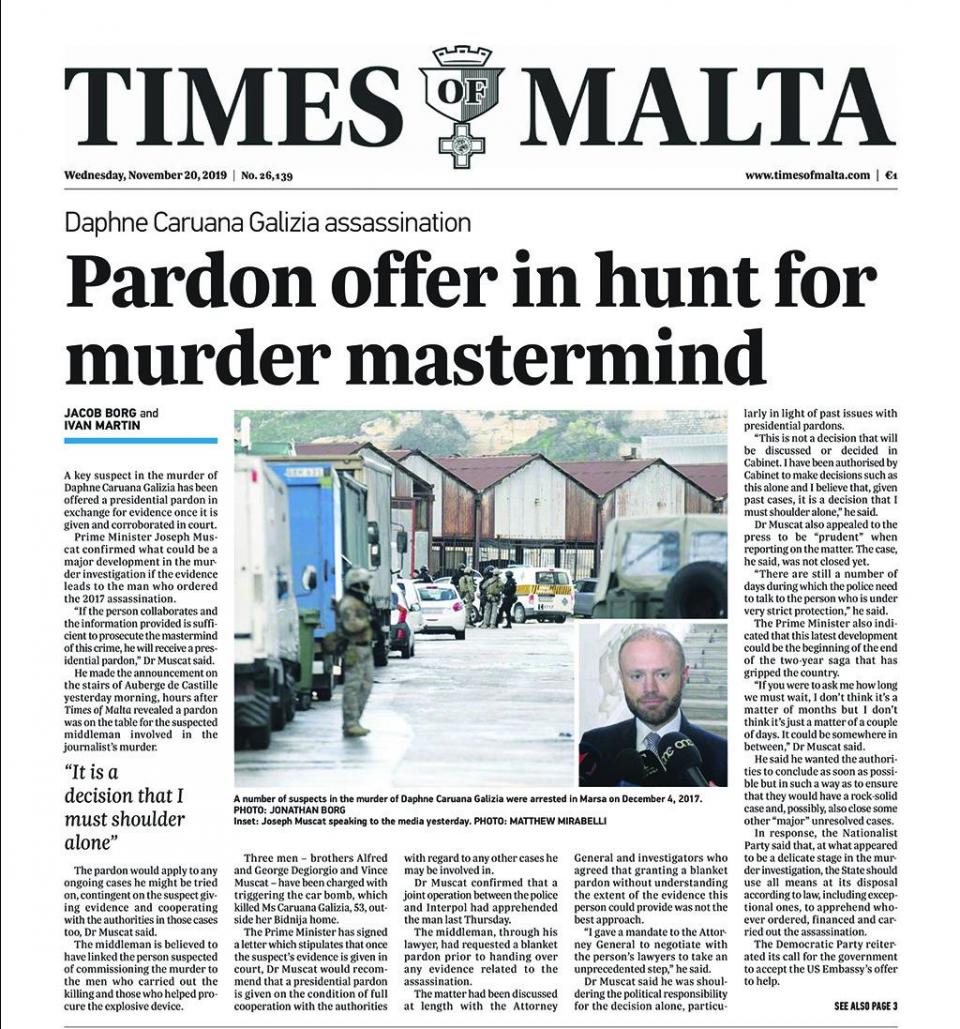 November 19: Times of Malta reveals that a man arrested on money-laundering charges the previous week is believed to be a middleman in the Caruana Galizia murder and has demanded immunity from prosecution in exchange for information about the murder and other crimes.

Within hours, Muscat confirms the arrest and says he has agreed to grant the man a pardon, provided the information he gives can be corroborated in court.
The middleman is eventually named as Melvin Theuma.

November 20: Businessman Yorgen Fenech is arrested in the early hours of the morning as he tries to leave the Portomaso marina aboard his luxury yacht. Fenech is intercepted by an Armed Forces of Malta patrol vessel at around 5.30am, arrested and taken in for questioning by the police.

That evening, activists take to the streets in Valletta to protest against the government and demand the Prime Minister’s resignation. Two police officers are injured as the Justice Minister’s car is swarmed by furious demonstrators. 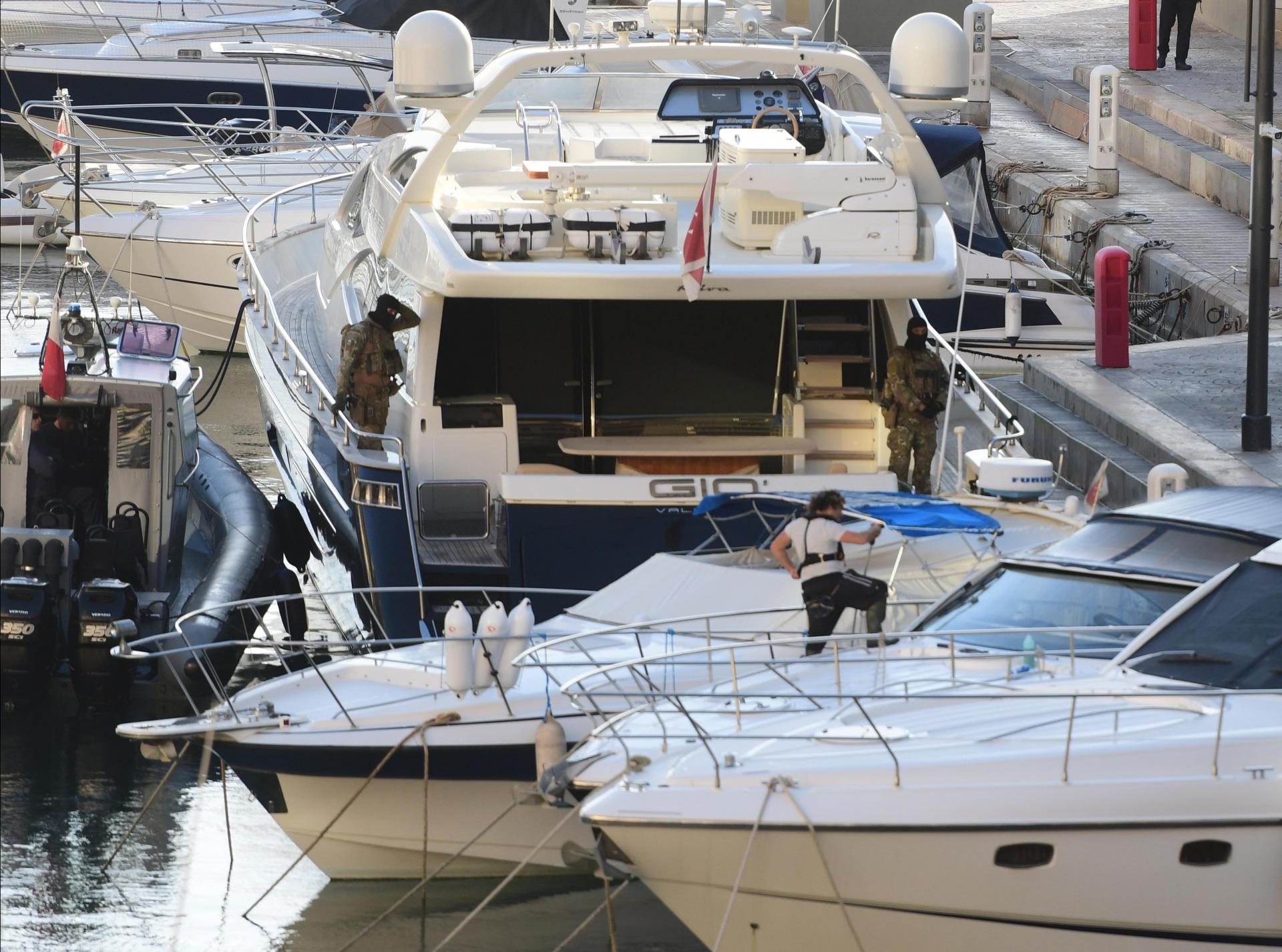 November 21: Economy Minister Chris Cardona is among a number of people hauled in for questioning by the murder investigation team.

November 26: Keith Schembri resigns his position as chief of staff to the Prime Minister.  His resignation comes as sources confirm he had been taken in for police questioning in relation to the murder case. Later that day, a tense Cabinet meeting would see Tourism Minister Konrad Mizzi resign from Cabinet, while Economy Minister Chris Cardona temporarily suspends himself.

November 28: Cabinet is convened for a marathon late-night meeting which stretches into the early hours of the morning. In a bizarre 3.30am press conference, Muscat announces that Cabinet had refused a presidential pardon for Fenech. That night Keith Schembri is released from police custody.

November 29: Times of Malta reports how during the previous day’s lengthy Cabinet meeting, ministers heard from the investigation team how a note handed over by Fenech appeared to blame Cardona for the murder. Several ministers raise concerns that Schembri, suspected of authoring the note, had tried to frame their colleague.  Reporters are stunned as Fenech leaves court from the front door and walks down the street of Valletta to his lawyer’s office.

November 30: Fenech is formally charged with the murder. He pleads not guilty.

December 1: Muscat announces in a televised address to the nation that he will be stepping down as Prime Minister. His departure would have to wait until a new Labour Party leader is selected in an electoral process in January. 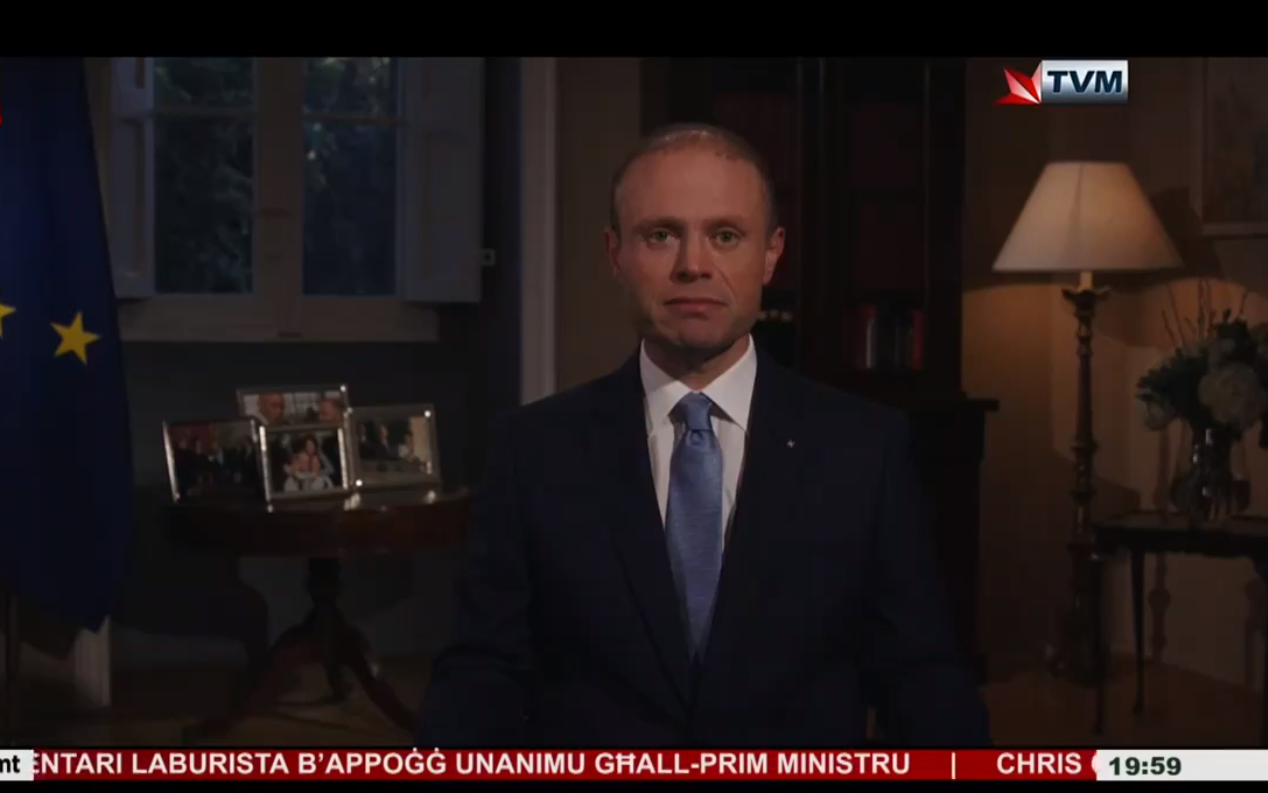 Prime Minister Joseph Muscat announcing he was stepping down.

December 3: Times of Malta reports that a letter found by the police during searches of Fenech’s Portomaso property implicates both the millionaire business magnate and Schembri in the assassination. The letter was hand-written by Theuma. Earlier a photo of Schembri and Theuma at Auberge de Castille is leaked to the press. MEPs on a rule of law mission in Malta emerged from a meeting with the Prime Minister unconvinced by his explanations surrounding the investigation into the assassination.

December 5: Fenech claims Schembri had been keeping him abreast of developments in the murder investigation.

December 8: One of the largest-ever civil society protests calling for justice is held in front of the office of the prime minister. 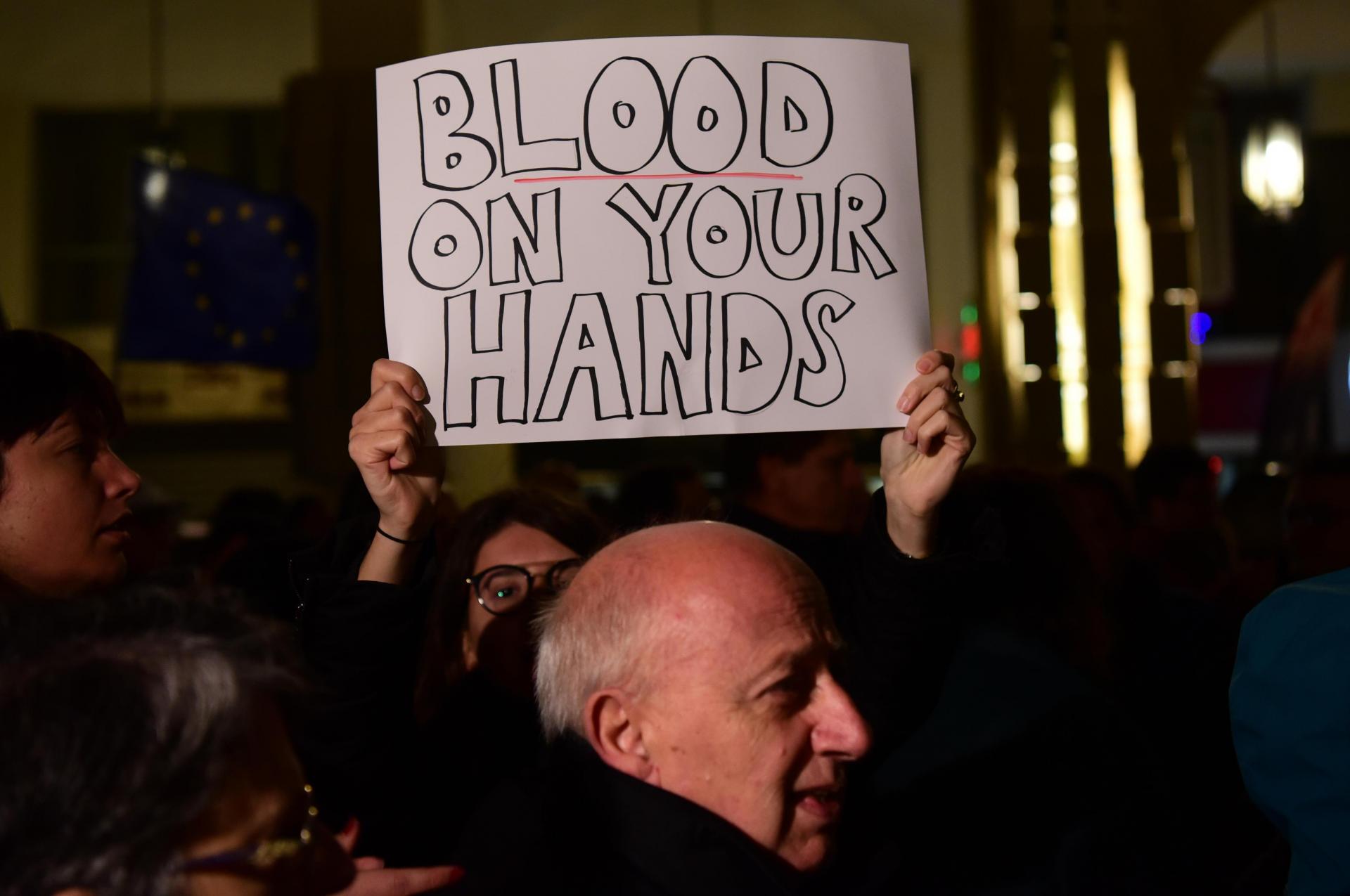 December 12: A court hears the middleman claim that Fenech had passed on sensitive information he was getting from Schembri. An earlier sitting, however, hears Theuma insist it was Fenech and not Schembri who had masterminded the assassination.

December 13: The annual Republic Day parade through the streets of Valletta is drowned out by the jeers and whistles of the hordes of demonstrators that flood the capital.  During his speech, President George Vella insists Malta is far bigger than the “gang of people” who brought shame on the country.

December 17: Times of Malta reports how Fenech walked away from his once-secret offshore company 17 Black with two cheques worth €1.5 million. A “stalled” magisterial inquiry and a botched attempt by the police economic crimes unit to obtain information from Dubai about the mystery company’s activities are exposed.

December 18: Schembri testifies in court for the first time in relation to the assassination case, denying he had ever leaked sensitive information on the murder probe to Fenech. That same day MEPs in Brussels vote overwhelmingly on a resolution calling on Muscat to step down immediately.

December 19: Lead investigator Keith Arnaud tells a court how police have not been able to examine Schembri’s mobile phone because he claims to have lost it. It would later emerge that the former chief of staff had also declined to hand over passwords to investigators. 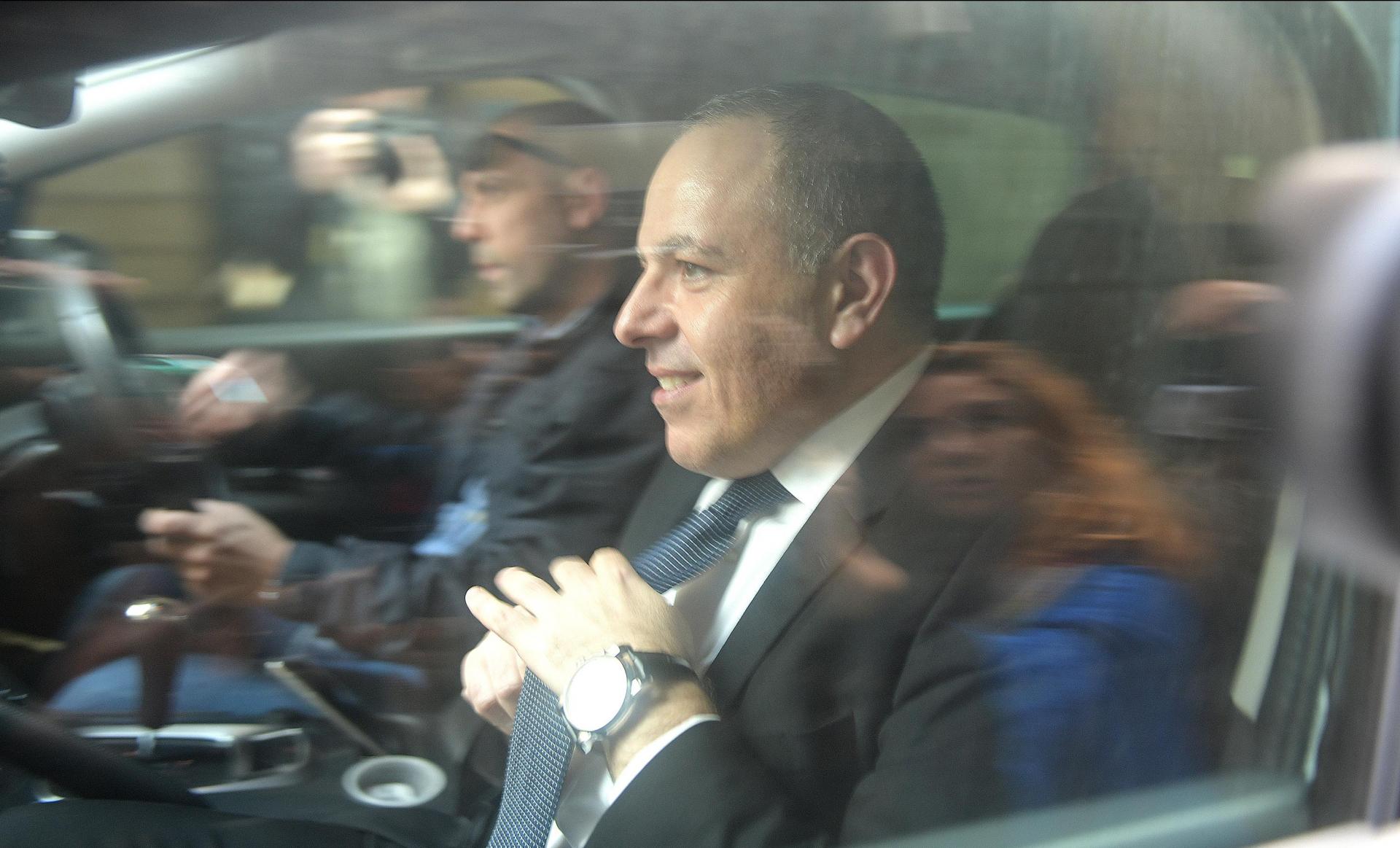 December 22: The Sunday Times of Malta reports how the murder investigation risked being totally derailed as the middleman was caught moving key evidence from his house at the time of his arrest. Sources says this was just one of many suspected cases of “sabotage” to the case.

December 27: Times of Malta reports Yorgen Fenech was one of Muscat’s guests of honour at a party held at the Prime Minister’s official Girgenti residence last February, where he gifted him fine wine worth thousands of euros. Fenech had also given the prime minister two expensive watches worth thousands in the past.